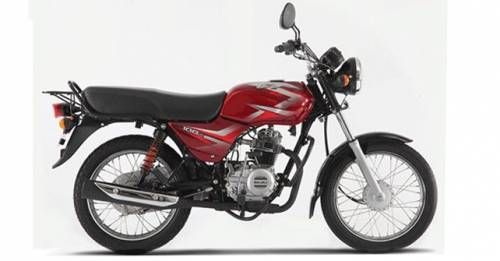 The Bajaj CT100B is a more affordable version of the CT100.

Bajaj Motors may have skipped participating at the 2016 Auto Expo, but it’s trying to be part of all the action from outside. Two days prior to the expo, Bajaj unveiled the all-new “V” premium commuter motorcycle, and now it has launched a new variant of its entry-level CT100, the CT100B. The CT100B is priced at Rs 30,990 (Ex-showroom, Delhi)

The CT100B is a more basic version of the CT100, and costs around Rs 4,000 less. It comes with a round headlamp, flatter seat and a basic grab rail design. The CT100B will retain the 99.27cc single-cylinder air-cooled engine of the CT100. The engine has a rated power output of 8bhp and delivers 8Nm of torque. Power transmission duties are carried out by a 4-speed gearbox. Bajaj claims the CT100B will return a fuel efficiency of 99.1km/l!

The CT100 B is offered in four colours, and comes with a two-year warranty.

Commenting on the launch of the CT 100B, Mr. Eric Vas, President – Motorcycles Business, Bajaj Auto said, “With the CT100B, customers can enjoy the pleasure of owning a new bike rather than compromise by searching for a second hand bike. The CT100 is one of the most successful entry level 100cc bikes in India selling over 5 lakh bikes in the 12 months since its launch last February. We are confident of attracting more customers to the CT100 family.”