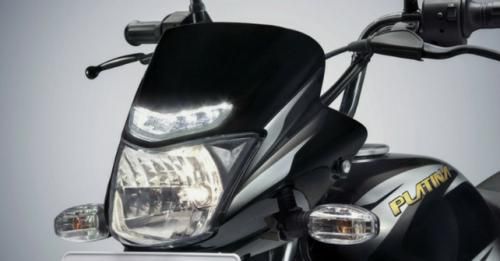 Bajaj Auto has launched a new variant of its Platina commuter motorcycle, which features a LED Daytime Running Light (DRL) strip above its headlight.

DRLs or Auto Headlamp On (AHO) are becoming mandatory on two-wheelers in India very soon. While most two-wheeler manufacturers are opting for the AHO function in their bikes, the Bajaj Platina ComforTec is the first bike in the commuter100cc segment to come with a LED DRL.

Bajaj claims that the LED DRL in Platina ComforTec consumes less power and also delivers better fuel consumption figures, compared to other bikes with AHO feature. Also, according to Bajaj, the ComforTec technology available on the Platina reduces jerks by 20 per cent, as compared to other 100cc motorcycles. The Platina features 28 per cent longer travel front suspension and 22 per cent longer rear suspension than any other motorcycle it competes with, resulting in better absorption of bumps.

On the updated Platina’s launch, Eric Vas, President, Motorcycle Business, Bajaj Auto said, "With the introduction of this upgraded Platina ComforTec, we have made a superior product even better. Customers shall love the combination of comfort, superior mileage and LED DRL styling that the new Platina offers".

Mechanically, there are no changes made to the Platina. The updated Bajaj Platina ComforTec is available in two colours - Ebony Black with silver decals and Cocktail Wine with red decals. The bike is prices at Rs. 46,656 - ex-showroom, Delhi.