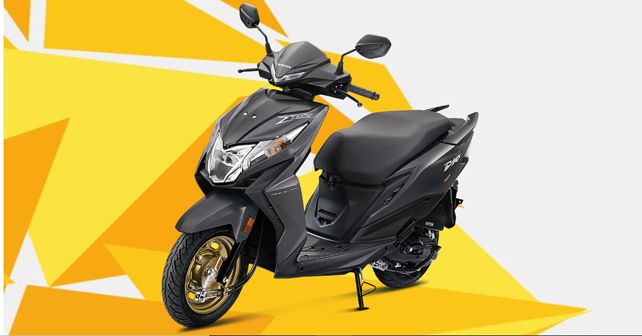 Aside from using the updated 110cc engine as the Activa, the Dio gets Honda’s silent start-stop system, a fully digital instrument cluster, telescopic front forks, 12-inch front wheel and some cosmetic changes

Honda has been releasing some teaser images of the BS-VI Dio over the last week. Now that cat’s finally out of the bag as the updated Dio is now on sale at Rs 59,990 for the standard model and Rs 63,340 for the Deluxe variant – both prices ex-showroom Delhi. So, what do you get for the additional Rs 7,000 (approximate) you pay over the BS-IV model?

The most obvious change to the BS-VI Honda Dio is the design. The Dio has always been a good-looking scooter and with this refresh, it looks even sharper. The headlight, front mudguard as well as the side panels are edgier now than before. Just like on the Activa 6G, the Deluxe variant of the Dio to comes with LED headlight. The side panels and the grab rail has been reshaped too. To further add a sense of style, the Dio's steel wheels have been washed in a golden shade. The Dio also gets a fully digital instrument cluster. With the display showing fuel efficiency (real-time & average), service due indicator, and more it is a lot more informative than before.

Just like before, the new Dio borrows the same motor from the BS-VI Activa – a 109.51cc fuel injected motor that develops 7.7bhp and 9Nm. The Dio also gets Honda’s patented silent start-stop function. Other major changes to the Dio include a larger 12-inch wheel at the front and telescopic forks at the front. Braking duties are performed by a drum setup at both ends – there is still no disc option even in the Deluxe variant.

The standard variant of the BS-VI Honda Dio is roughly Rs 4,000 cheaper than the Activa 6G, and the Deluxe variant will save you roughly Rs 2,000.