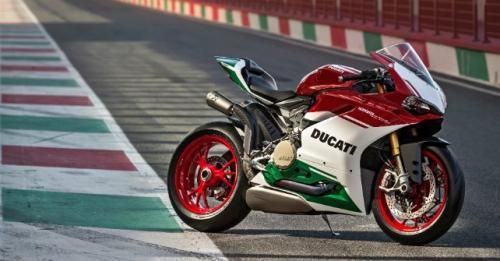 Late last month, Ducati released a teaser image hinting that a limited-edition Panigale was on its way - the last one before Ducati moves from a twin-cylinder motor to a V4. The Italian bike maker has now taken the wraps off the motorcycle. Say hello to the Ducati 1299 Panigale R Final Edition.

It has been out in the open for a while that Ducati is about to replace their twin-cylinder engine with a V4 derived from their MotoGP endeavours. To honour the success that the V-twin brought Ducati, they have developed what could arguably be the most insane production motorcycle. The 1299 Panigale R Final Edition sports an engine that is derived from the 1299 Superleggera and produces 206 horses and 142Nm. It gets a lighter crankshaft with a larger crank pin, tungsten balancing pads, and titanium intake exhaust valves and con-rods. Thanks to all the weight shedding, the 1299 Panigale R Final Edition tips the scale at just 179kg. This gives the motorcycle a power-to-weight ratio of... wait for it... 1150bhp/tonne. Of course, with that kind of power, you need a strong enough electronics package to keep you from flying. The 1299 Panigale R Final Edition comes with Bosch-sourced cornering ABS, wheelie control, traction control, engine brake control and more such wizardry.

At the official unveiling, Claudio Domenicali, CEO of Ducati Motor Holding said, "Maybe no other motorcycle manufacturer has bound its name so tightly to an engine as Ducati has to its sports twin-cylinder. Today, we're here to celebrate its history, just as we stand on the cusp of a new era in which our desmodromic system will be used on a new generation of V4 engines derived from extensive experience in MotoGP, a championship in which our engine has demonstrated outstanding performance. But that's the future. Today, we want to pay homage to a twin-cylinder engine that - thanks to incredible torque and compactness - has seen Ducati win races in every SBK championship it has ever participated in."

Like most other Ducati limited edition models, this one too wears a tricolour livery. The 1299 Panigale R Final Edition was unveiled at the Laguna Seca round of the World Superbike Championship by Chaz Davies and Marco Melandri. Ducati India will start deliveries of the motorcycle in September, with its price to be announced shortly.