Ducati Monster 797 – All you need to know 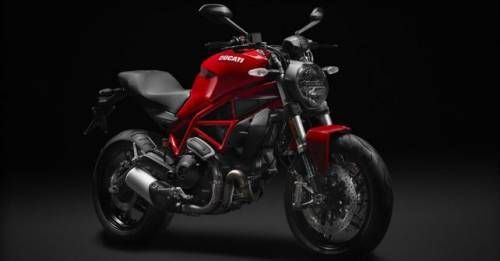 The Ducati Monster 797 is set to launch in India on June 14.

Ducati is all set to launch the smallest bike under its Monster sub-brand. The Monster 797 will join the already available 821 and 1200 motorcycles in the Monster range, thus making it the entry level offering of the Ducati street fighter series. Here are the things you should know about the upcoming baby Monster.

Scrambler Engine: The 803cc L-twin motor which powers the Ducati Monster 797 is shared with the Ducati Scrambler series, which is already on sale in India. In the Monster, it produces 75bhp of power and 68.9Nm of torque, all mated to a 6-speed transmission.

Single Exhaust: The dual exhaust setup of the now discontinued Monster 797’s predecessor, the Monster 796, is ditched in favour of a single 2 in 1 exhaust. Ducati claims that this has been done to enhance the Monster 797’s fluid dynamics.

Dimensions & Ergonomics: The bike weighs 175kg (dry) and has a short rider friendly saddle height of 805mm. Fuel tank capacity stands at 16.5 liters. The wheel base is 1,435mm long, which is roughly 35mm shorter than the bigger Monster 821.

Trellis frame: The traditional Ducati tubular steel trellis frame rests in the core of the new Monster 797. According to the Ducati, it provides the motorcycle with rigidity, helps in weight management, and characteristically exposes the L-twin motor.

Brakes & Tyres: The Monster 797 houses twin 320mm semi floating discs with radially mounted Brembo Monobloc 4-piston caliper at the front and a 245mm disc with single piston caliper at the rear. Dual channel ABS developed by Bosch will come standard. Wrapped around the 10 spoke wheels are Pirelli Diablo Rosso II tyres, 120/70 R17 at the front and 180/55 R17 at the rear.

Price and competition: The cheapest motorcycle of the Ducati Monster range is speculated to start a shade below the Rs. 8 lakh mark, which will position it above the Scrambler series. At this price, it is substantially more expensive than the Kawasaki Z650, and will compete with the fully faired, 4-cylinder, Honda CBR650f.