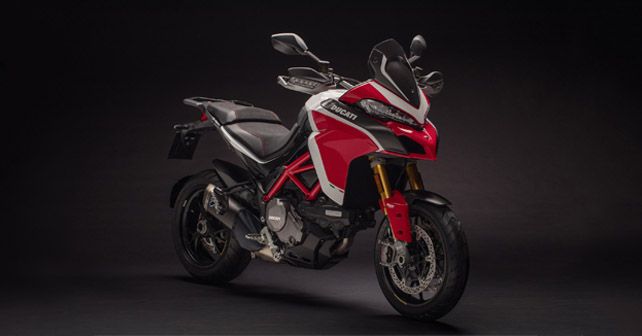 Ducati India is now accepting bookings for a limited number of units of the Multistrada 1260 Pikes Peak edition.

As Carlin Dunne won this year’s Pikes Peak Race on the new Multistrada 1260, Ducati India has decided to celebrate the occasion by introducing the Pikes Peak limited edition of the ADV in our market.

The Pikes Peak version of the bike draws its inspiration from the legendary American hill climb race in Colorado. At this year’s event, the 2018 Spider Grips Ducati Pikes Peak team won the race to reclaim the crown as King of the Mountain with Dunne by clocking in a time of 9:59:102, placing their Ducati Multistrada 1260 in first place in the standings. The victory at this year’s event was Ducati’s seventh since they made their debut in 2008.

The Pikes Peak International Hill Climb, also known as the The Race to the Clouds'', is held in southeren range of the Rocky Mountains, some 16 km west of Colorado Springs. A distance of 20 kilometres separates the starting line at an altitue of 2,862 metres from the finishing line at 4,300 m. It's an incredibly tough competition.

'We did it. We took the podium,' said Dunne, who notably was the first motorcyclist ever to traverse the 4,720-foot Pikes Peak race course in less than 10 minutes in 2012. 'The Multistrada 1260 Pikes Peak proved as amazing as we all hoped. It performed flawlessly, giving me everything I needed to get up the mountain. Pikes Peak is never an easy race, but the weather cooperated and we clinched the victory for Ducati.'

Based on the foundations of the Multistrada 1260 S, the Pikes Peak edition of the ADV is powered by the 1,260cc Ducati Testastretta DVT V-Twin engine, featuring new chassis dimensions with new front end geometry and a longer swingarm. The Multistrada 1260 Pikes Peak also comes equipped with new forged aluminium wheels, making it lighter in wieght than the standard wheels offered on the regular Multistrada 1260 S. Additionally, the bike is fitted with the Öhlins fork and Öhlins TTX36 shock, which can both be adjusted mechanically. The colours on the bike are also inspired by the bike which competed in the event.

'In line with our commitment of making the most desirable products available to the Indian riders, we are extremely happy to announce that Ducati India will be bringing the Multistrada 1260 Pikes Peak model to the India market and our dealers will start taking bookings today onwards will deliveries beginning soon'. Said Sergi Canovas, Managing Director of Ducati India.

While dealers can now begin to register bookings for the bike, only limited numbers will be available in India. The Ducati Multistrada 1260 Pikes Peak will cost ₹21.42 lacs ex showroom pan India.