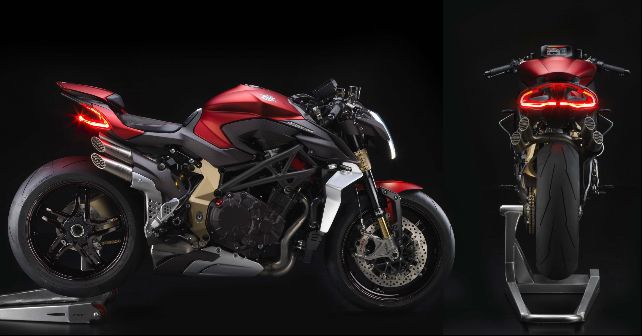 The Brutale 1000 get inspiration from MV Agusta’s WSBK machine, and the result, of course, is a manic machine

Litre class offerings seem to be all about bragging rights these days. A week ago, Aprilia took the wraps off the 2019 RSV4 1000 Factory that now develops 217bhp. Then Ducati brought in the crazier version of the Panigale V4, with an R suffix – once again pushing similar output figures. It was time for MV Agusta to step in.

This here is the MV Agusta Brutale 1000 Serie Oro. You will probably never see it, as only 300 units will be built. You can, however, make do with the spec sheet and let me tell you that it promises to be more lunatic than ever. The Brutale 1000 Serie Oro is on based on Massimo Tamburini’s artwork. It looks as mean as we have always known it to be, but at heart, it manages to pull out the highest performance figure of any production streetfighter. It develops 205 horses in the standard trim and can develop 4 more horses with the race kit installed.

To extract such power, MV Agusta has looked at their World Superbike Championship spec F4 RC for inspiration. The Serie Oro uses the same philosophies in terms of combustion, reducing friction and lubrication in order to produce these results. Other changes to the Brutale 1000 Serie Oro include a new set of sintered valve guides, a redesigned combustion chamber, reworked camshaft and more. The Italian superbike maker has also made a few changes to the intake and exhaust. To reduce friction, this Brutale 1000 uses low-friction Asso rings. There’s growth in terms of technology too – a new 5-inch TFT screen for the instrument cluster, eight-level traction control assisted by an inertial measurement unit. It also comes equipped with wheelie control, launch control and other such wizardry.

As has always been the case, in this MV Agusta too, the devil is in the details. The winglets near the radiator help reduce downforce and then there are carbon fibre bits all around – from the wheels to the clutch cover. Of course, all of this has resulted in considerable weight reduction – the Serie Oro tips the scale at just 186 kilos while with the race kit it weighs just 184kgs.