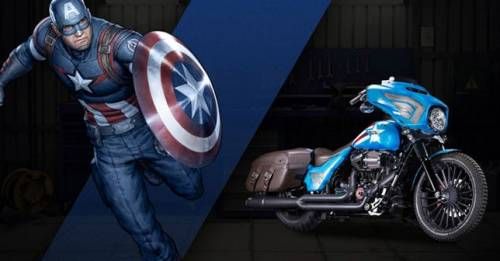 Comic book and motorcycle enthusiasts in Australia and New Zealand are all excited about a new range of custom Harley Davidson motorcycles coming their way with inspiration from some Marvel superheroes.

In quite a fun association, numero uno cruiser motorcycle maker Harley Davidson and comic giant Marvel have come together to make a bunch of custom motorcycles taking inspiration from the world of comic book superheroes.

To be exact 27 custom Harley Davison Marvel motorcycles will be made to reach out to fans in Australia and New Zealand where these bikes will go on sale with numerous character themes.

Here is the list of custom Harley Davison Marvel motorcycles that will go on sale:

As you can see, the aim is to make custom bikes with characters of Marvel superheroes matching the character of these Harley Davidson motorcycles.

“The spirit of freedom is alive and thriving in the Harley-Davidson Street Glide Special. Like Captain America, it leads from the front with strength, power and endurance, enabling you to venture to new worlds and beyond,” said, Harley-Davidson spokesperson, David Turney.

“Harley-Davidson and its dealers have done an amazing job with this Marvel inspired collection.  It’s exciting to see such a rich legacy of iconic characters and their individual stories so creatively captured,” said Gavin Ashcroft CMO of the Walt Disney Company AUNZ.