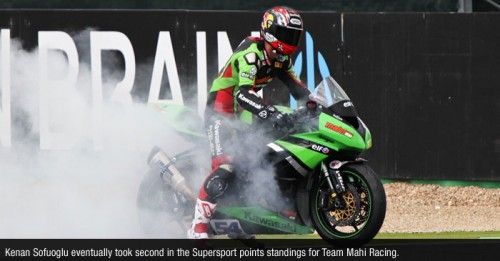 Three wins from four races. That’s what it took for Kawasaki’s Tom Sykes to effectively throttle Eugene Laverty’s attempts to beat him to the 2013 World Superbike Championship.

Over the course of the rounds in Laguna Seca and Magny Cours, it was just a fourth place finish in the second race in America that put a blot on an otherwise perfect performance by Sykes.A third and second place finish behind Laverty at Jerez meant that Sykes ultimately finished 23 points ahead of the Aprillia rider, who was trailed by teammate Sylvain Guintoli.

In the Supersport category, Mahi Racing’s Kenan Sofuoglu finished his campaign with a win and second place in Magny Cours and Jerez. It helped him consolidate his second place in the standings behind Yamaha’s Sam Lowes. It’s not yet clear when WSBK will make its long awaited India debut since it was first announced in 2011. Currently Jaypee Sports International are said to be looking at a 2015 date to bring it to the Buddh International Circuit (BIC).

To coincide with Formula 1’s possible return to the country? It’s a bit much in terms of speculation as of now, even for racing fans who normally don’t mind letting theories fly with reckless abandon at times. Certainly the explanation given regarding the cancellation of untrained marshalls seemed a little strange considering that two F1 races had been held successfully with a large contingent of Indian marshalls.

Maybe the owners of the BIC have a bigger prize in mind in MotoGP, which falls under the Dorna Sport umbrella. But then again it surely makes sense to ‘warm up’ as it were on a smaller scale.