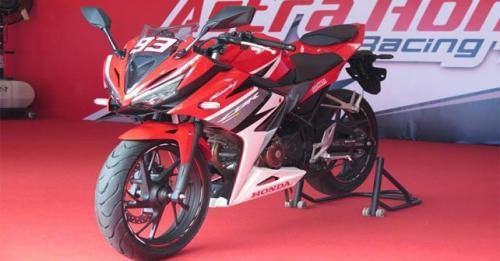 It was a massive event held across 8 different cities in the country. Delhi might have been centre stage for the Honda Revfest, but the lively atmosphere was the same in Mumbai, Bangalore, Ahmedabad, Chennai, Kolkata Hyderabad and Indore. The Japanese bike manufacturer called it a "Fun Motorcycle revolution" as they unveiled 5 new products across all ranges. Well, actually only 2 brand new products were launched, while we also got to see the already launched Livo, and a refreshed version of the CBR 150R and CBR 250R.

Brand ambassador Akshay Kumar was also present for the occasion and he unveiled the much awaited CBR 650F. The fifth product that was launched is called the Hornet 160R, which is a sportier variant of the Honda Unicorn 160, and was also launched earlier this year. There was also a small fashion show to display apparel design by GAS, but we were much more interested in the bikes. So let's get into each bike with some details.

Honda Livo
The Livo was actually launched last month, but it was launched again at the Revfest. The Livo is a commuter motorcycle that uses Honda Eco Technology(HET) for improved combustion efficiency and increased compression ratio. The 4 stroke, 110cc bike delivers a class leading mileage of 74km/l. The Self-Drum-Allow variant of the Livo has been priced at Rs 52,989, while the Self-Disc-Alloy is a tad expensive at Rs 55,489 (Ex-showroom, Delhi).

Although we were hoping to see the CBR 300R, we just got to see an updated version of these two bikes instead. No changes here except for new colours and new graphics on the bike. All the technical specifications remain the same.

Honda CB Hornet 160
This is actually quite a good looking bike. The Hornet is simply a sportier version of the CB Unicorn 160, and it gets the same 163cc unit, which is rated to deliver 14.5bhp of power and 14.61Nm of torque. The main differences is that it gets sportier design elements and front and rear disc crakes.

Honda CBR 650F
Now this was what everyone was really waiting for. The CBR 650F is now finally here and it carries a price tag of Rs 7.2 lakh ex-showroom Delhi, which some people are not to happy about, despite the fact that it is being assembled in India. Whatever be the gossip, the facts are that this bike is quite amazing and we cant wait to test ride it. The CBR 650F is the first four-cylinder motorcycle to be produced in India and it comes with a wonderfully engineered 649cc, four-cylinder, liquid-cooled engine that produces 87bhp, and it is mated to a 6-speed manual transmission. The CBR 650F is more sports-tourer than it is track oriented, but it gets great new technology and features. The bike looks fantastic and will compete with the Benelli TNT 650, the Triumph Street Triple, and the Kawasaki Ninja 650. To get a good comparison of these bikes just check click here.