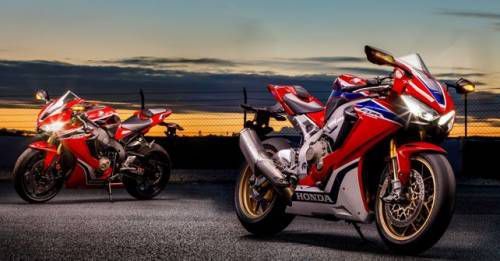 For all the Honda fans out there, the Japanese bike maker has just announced the commencement of bookings for the all new 25th anniversary edition Honda CBR 1000RR Fireblade and the CBR 1000RR Fireblede SP in India. The Honda Fireblade is the flagship super sport motorcycles from global Honda line-up, and it is perhaps one of the most legendary litre-class bikes available in India. and the new 25th edition looks amazing.

Commenting on the development, Mr. Yadvinder Singh Guleria, Senior Vice President - Sales and Marketing, Honda Motorcycle and Scooter India said, “Since 2009, when the Fireblade was first introduced in India, it has redefined the benchmarks for refinement, reliability & performance. With an unmatched thrilling experience for the rider on board, the all-new Fireblade will leave the riding enthusiast spellbound. The new and extremely advanced Fireblade, will be the most powerful, faster and lighter CBR1000RR from Honda’s stable and we are very excited to add another chapter to the success story with its introduction in India.”

The 2017 CBR1000RR Fireblade SP marks 25 years since the legendary litre-class bike re-wrote the rules of the Super Sport segment. The bike is powered by a 999cc in-line 4-cylinder engine that produces 189bhp and 114Nm of torque, and is mated to six-speed transmission. The Fireblade as always been regarded as one of the best hadling sports bikes ever created. Continuing its relentless focus on handling and agility under the mantra of ‘Total Control’, there is a 16kg weight reduction to a class-leading 195kg.

The bike also gets a comprehensive electronic control package that features a new gyroscopic ABS system, Throttle by Wire, 9 Level Honda Selectable Torque Control , Selectable Engine Brake, Honda Electronic Steering Damper and Power Selector. It certainly gets all the new age technology you would expect from a modern Japanese super bike. But there is still more, as the Fireblade also gets Riding Mode Select System, and it also uses a full-color TFT liquid crystal dash, which is inspired by the RC213V-S street legal version of Honda’s MotoGP machine.