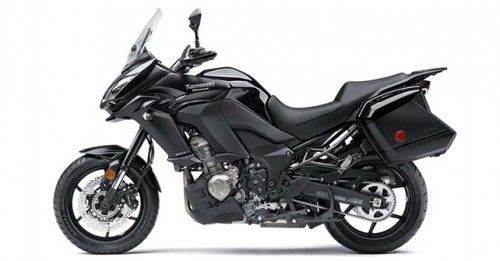 The Japanese bike maker, Kawasaki, is continuing its on-slaught of product launched in India. The most recent bike to join the portfolio is its adventure touring bike called the Versys 1000, which comes under the same segment as the Suzuki V-Strom.

The Kawasaki Versys 1000 recently went under the knife and has gotten a fresh new look for 2015. It now gets sharper lines and a more aerodynamic look with new headlights and fairings. The Kawasaki Versys 1000 is powered by a 1043cc, four-stroke, liquid-cooled, in-line four cylinder and fuel-injected engine and is capable of producing 102Nm of torque. The engine is mated to a 6-speed transmission and are situated inside a strong twin-spar aluminum frame. The front suspension is a KYB 43mm inverted front fork, while the rear gets a horizontal back-link shock with adjustable rebound damping and adjustable spring preload. ABS also comes as standard on the Versys 1000.

The bike is aimed for long distance touring, and is also capable of going off-the road and therefore has a very good ground clearance as well. The Kawasaki Versys 1000 is priced at Rs 12.9 lakhs (ex-showroom, Pune).