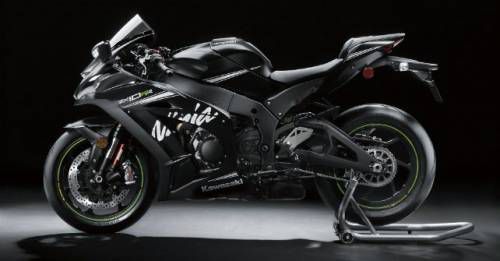 Kawasaki has officially launched a new version of its popular ZX10-R that is purely track oriented. Say hello to the new Kawasaki ZX-10RR. Priced at Rs 21.9 lakh (ex-showroom Pune), only 500 units of this motorcycle will be sold worldwide. The ZX-10RR is Kawasaki’s answer to Honda’s CBR1000RR SP2.

Although this RR version sports the same 998cc four-cylinder liquid-cooled engine that churns out 200bhp and 113.5Nm, in nature it is a lot different. The cylinder head of the ZX-10RR has been tweaked to make space for high-lift camshafts that have 0.7mm more lift than the standard ZX-10R. In order to reduce the stress on the engine at higher rpms and to make space for race kit pistons, the connecting coolant passages have been made narrower. Kawasaki has also fitted the RR with a quick-shifter to allow clutchless up and downshifts. This system can also be fitted on the standard ZX-10R but you will have to purchase a race kit ECU in order to do so.

The ZX-10RR also gets exclusive seven-spoke forged aluminium alloy wheels that the company claims to be more rigid and have a less rotational moment of inertia than the ones on the standard model. All these changes on the ZX-10RR have resulted in a 1-2 second quicker lap time around the company’s Autopolis test track in Kumamoto, Japan. The ZX-10RR also wears Pirelli’s super grippy Diablo Supercorsa SP tyres. Only available with a single seat option, passenger fittings like the rear seat, foot pegs and brackets have been removed to shed some weight.

The standard Kawasaki ZX-10R is priced at Rs 18.3 lakh while this track focused iteration demands a premium of Rs 3.6 lakh over the standard model. The Kawasaki ZX-10RR is only available in a black colour shade.