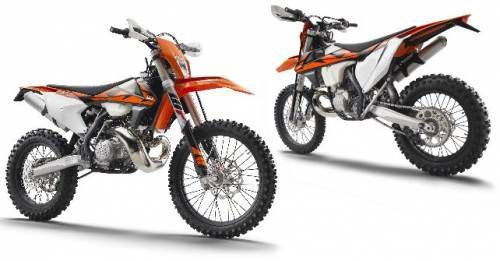 Two-strokes are back, and how!

Over the last few months, a lot has been spoken about KTMs plans to bring fuel-injection in two stroke offerings. The plans have now come to life as the Austrian bike maker has taken the wraps off the world’s first fuel-injected two-stroke offerings – the 300 EXC TPI and 250 EXC TPI. Although Transfer Port Injection (TPI) and direct injection tech is new for two-stroke motorcycles, this technology has been in use in snowmobiles for a while now. Both these motorcycles make use of two injectors in the cylinder thereby improving fuel efficiency and also making the engine smoother. Thanks to this new system, fuel will not have to be premixed nor will carb need to be adjusted in accordance with environment conditions.

With stricter emission norms being levied globally, survival of two-stroke motorcycles has been in doubt for a while. While Japanese bike makers have made the shift to four-strokes, KTM continues to fight for two-strokes and believes there is still a market for lightweight enduro offerings.

“Our goal was to create a two-stroke Enduro bike that would not be incredibly complex, while also retaining the feel of a carburetted machine, yet with all the benefits of fuel injection. This includes the elimination of the need to pre-mix fuel or change the jetting for different environments, which is a major benefit to the rider for hassle free two-stroke fun.”

KTM says both these motorcycles will be used in competition next year. They have been fitted with a lot of equipment including a lightweight steel alloy chassis, fully adjustable WP suspension and Brembo brakes. Interestingly, both these models meet the Euro 4 standards highlighting that even two-strokes can be environment friendly. While this new tech is only being used on these competition bikes for now, we would love to see it trickle down to production motorcycles in the near future.