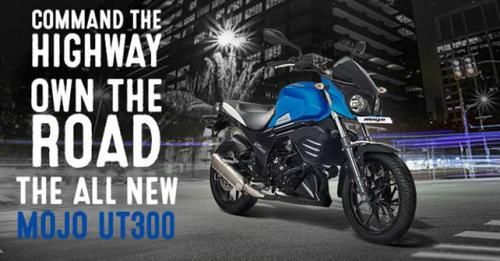 Mahindra has officially launched the new Mahindra Mojo UT300 for an ex-showroom, Delhi, price of Rs. 1.5 lakh. While the bike maintains the styling of the standard model, which will henceforth be identified as the XT300. The UT300, to appeal to a larger audience at a more affordable price, has done away with some equipment and features.

The engine in the Mojo UT300 is the 292cc, single-cylinder, liquid-cooled motor with a six-speed transmission. The fuel-injected engine in the standard bike churns out 27bhp and 30Nm of torque. However, to cut down the price, the fuel-injection system has been replaced by a traditional carburettor, which will most likely result in a performance drop – in the UT300, the engine develops 23bhp and 25Nm of torque. Another significant mechanical change is the missing inverted forks in the lower trim Mojo UT300. Additionally, it also does away with the twin exhaust for a single-side setup. It comes equipped with MRF tyres instead of the Pirelli Diablo Rosso II set found on the XT300. The LED daytime running lights have also been given a miss, along with the gold-colour accents.