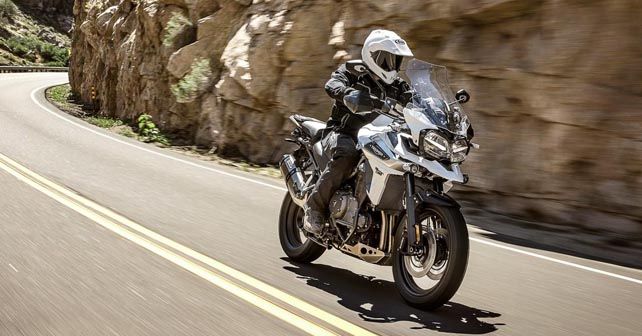 The updated Triumph Tiger 1200 comes with as many as 100 changes and is 11kg lighter than the outgoing version. It'll available in only XCx trim.

After the Bonneville Speedmaster and Tiger 800, Triumph’s third launch of the year is the new Tiger 1200. In its new avatar, the big-burly adventure tourer drops the ‘Explorer’ moniker and is priced at ₹17 lakh (ex-showroom). Triumph is offering the new Tiger 1200 in a single variant, dubbed the XCx. Booking for the motorcycle are open at Triumph dealerships across the country, and it'll will be sold here as a CBU.

The Tiger 1200 made its global debut at 2017 EICMA show in Milan. Although the new version looks remarkably similar to the one it replaces, Triumph claims that there are as many as 100 changes in the new motorcycle. The refinements in styling are easily noticeable, as the new Tiger 1200 comes with new LED headlamp, a TFT colour display like the Street Triple RS and Tiger 800, illuminated switchgear and so on. The feature list has grown even more extensive – it gets adaptive cornering light, semi-active electronic suspension, ride-by-wire throttle, Shift Assist, switchable ABS, keyless ignition, cruise control and six-riding modes among others.

Powering the new Tiger 1200 is the same 1,215cc three-cylinder engine that was offered with its predecessor. Power output stands at 141bhp and peak torque is 122Nm. There’s a six-speed gearbox that channels the drive via shaft mechanism. Now, although the power and torque figures are more or less unchanged, the new Tiger 1200 is 11 kilogrammes lighter than the outgoing motorcycle, so expect some performance gains as a result.