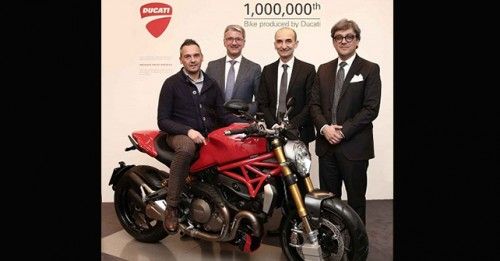 The historic Borgo Panigale factory of Ducati has produced one million Ducati motorcycles and the millionth motorcycles is a Monster 1200 S.

Probably the most important ingredient that makes a brand iconic is its legacy. Apart from delivering and making world-class products, it is also important to know the history behind these brands. One such iconic brand is Ducati – a bike manufacturer from Bologna, Italy that specialises in making motorcycles that resonate with style and performance with each passing year.

At its main factory at Borgo Panigale, Ducati recently produced its one millionth motorcycle and delivered it to its owner, a 47 year old Mr. Ernesto Passoni. The event took place on December 12 in Milan. The lucky owner has always been a Ducatista all his life and Ducati decided to reward his loyalty in the presence of top management of Audi and Ducati.

Delivering the motorcycle to Mr. Passoni an excited Claudio Domenicali, CEO, Ducati Motor Holding said, “Between 1946 and today we have designed, built and delivered one million dreams that have become reality to Ducatisti. To deliver the millionth bike produced directly into the hands of a passionate Ducatista is an incredible feeling and an incentive to continue along our growth path.”

Another interesting fact is that this milestone was reached with a motorcycle that made Ducati a success story all over the world. It was 1992 when first Monster rolled out of the Borgo Panigale factory and Ducati has not turned to look back since then.