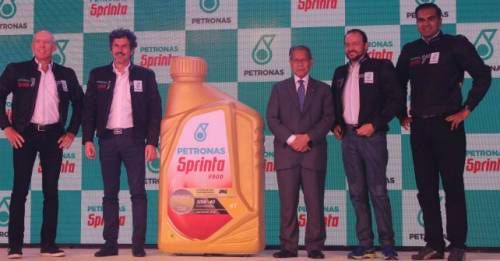 Considering how the two-wheeler market is rapidly expanding in India, it is hard to ignore it for long. This applies not just to motorcycle manufacturers but also other brands supporting the industry. The story of Petronas Lubricants International is somewhat similar. The Malaysian lubricant manufacturer has now stepped into the Indian two-wheeler market with the launch of its flagship Sprinta range of lubricants.

The Sprinta range has been developed with what the company calls as Ultraflex technology. Thanks to this technology, the engine can supposedly handle severe mechanical stress and high temperatures of the engine. In fact, the company claims that it gives up to 41 percent better oil film strength than the industry standard. This not only tackles the rattling noises that you sometimes hear from the engine but also addresses its sluggish performance.

Managing Director and Group Chief Executive Officer of PLI, Giuseppe D’Arrigo, said, “For a majority of bike owners, motorcycle is the primary mode of transport for their daily commutes, usually under heavy traffic conditions. This potentially leads to extensive usage and heavy load on the motorcycle, putting a lot of stress on the engine.”

The Sprinta range of lubricants from Petronas is available in synthetic and semi-synthetic form. It will be available in several variants for different applications – 10W-30 (for scooters), 10W-40, 15W-50, 20W-40 and 20W-50. The new range of PETRONAS Sprinta lubricant will be made available globally, in phases, from 30 March 2017. Petronas is expected to announce the pricing of the Sprinta range within the next week or so.