Royal Enfield Classic 500 Pegasus to be sold on July 25 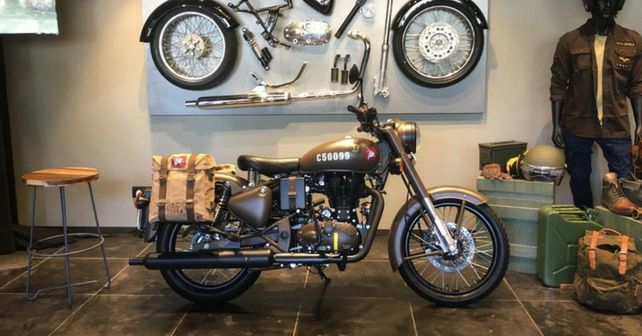 The limited edition Royal Enfield Classic 500 Pegasus, which was globally revealed in May this year, will be sold online in India on July 25, 2018. It is worth noting that the bike was put on sale earlier on July 10, but due to high demand, Royal Enfield’s website crashed resulting in the process being postponed.

The bike will go on sale at 4PM on July 25 on Royal Enfield’s official website. Only 250 units of the Classic 500 Pegasus have been allocated to India. India will only get the bike in a special Service Brown shade. The limited edition Classic is inspired by the RE/WD 125 - also known as Flying Flea - which was produced in the UK during World War II.

Every Pegasus Edition Classic 500 sports a unique serial number on its fuel tank. Other exclusive touches on the model include a leather strap with brass buckles on the air box, and blacked out parts like exhaust, engine, rims, handlebar and headlight bezel. However, the bike remains mechanically similar to the standard model, drawing its power from a 499cc, single-cylinder, air-cooled motor that produces 27.2bhp of power and 41.3Nm of peak torque.

Royal Enfield limited edition bikes have a history of selling out within seconds after being put on sale online. So, if you are interested in buying the Classic 500 Pegasus, make sure you act ridiculously fast at 4PM on July 25.