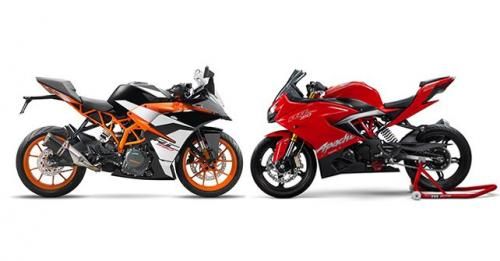 The TVS Apache RR 310 goes head-to-head against the KTM RC390 in our spec comparison test.

After knowing its price, the second most asked question about the new TVS Apache RR 310 is perhaps this – is it a match to the explosive and popular KTM RC390? While we believe this can only be answered by riding both the motorcycles back-to-back, there’s no harm in doing a spec-check to see which motorcycle scores more points over the other. After all, on-paper performance matters too, right?

The design of a motorcycle is a subjective topic, but even then there’s no denying that both these bikes look gorgeous in their own right. The newcomer, the Apache RR 310, looks a bit more stunning, we’ve to say. This is TVS’ first fully-faired motorcycle and the company has really aced it in the looks department. Whether it’s the front fairing with LED projector headlamps or the side profile with exposed trellis frame or the sharp tail with LED tail-lamp, the RR 310 looks really very good and proportionate from every angle. Full marks to TVS designers here! 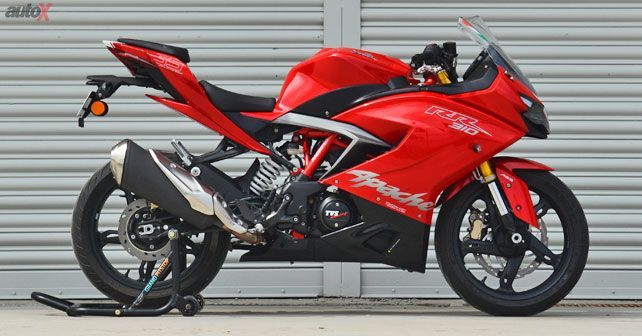 The KTM RC390 is no ugly duckling in comparison to the TVS. Its mean and petite dimensions – coupled with that flashy orange paintwork – sure make it one exciting looking machine. Where the KTM looks sharp and more focused, the RR310 looks grown-up and more pleasant. Whichever you pick, though, you’ll be grabbing a lot of eyeballs everywhere you go.

Dimension wise, both the motorcycles are evenly matched, albeit it’s the RR 310 that has a longer wheelbase – which on-paper would suggest that it’s going to be a little more stable around corners. Among other things, the KTM has a higher seat height and a smaller fuel tank.

This is the big differentiator between these two bikes. The newly launched Apache RR 310 comes powered by a liquid cooled 312cc single-cylinder engine that develops 33.5bhp and 27.3Nm of torque. However, the orangey Austrian simply creams the TVS here – it gets a bigger liquid-cooled 373cc single-cylinder engine that develops a whopping 43bhp and 36Nm of torque. Both the bikes come mated to a six-speed gearbox, although the KTM also gets a slipper clutch. 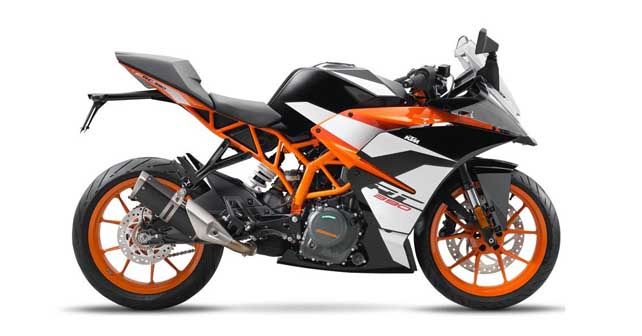 TVS claims the Apache RR 310 will clock 0-100km/h in 7.17 seconds and can reach a top speed of 160km/h. We don’t have the official numbers from KTM, but considering that it has 10 more horses and weighs almost the same as the TVS, it’ll definitely be quicker of the two on the open road.

Both the motorcycles feature a steel trellis frame. Both the bikes also get inverted forks at the front and a mono-shock at the back. And that really makes us a bit excited because we think both of these bikes will be evenly matched on the handling front. That said, the KTM has definitely more aggressive riding position than the Apache RR 310.

Even here, both the bikes come shod with 110/70 R17 front and 150/60 R17 rear tyre. However, while the TVS gets the Michelin rubber, the KTM gets Metzelers. And this could prove out to be a real difference when pushing hard around a corner. Still, we'd reserve our judgement till we ride these motorcycles on the racetrack.

The KTM RC390 gets a 320mm front disc and 230mm rear disc for deceleration duties. The RR 310 has a 300mm disc at front and a 240mm disc at the rear. Both the bikes get dual-channel ABS as standard, but the one on KTM can be turned on or off at will.

The KTM is slightly better equipped than the Apache RR 310 since it gets a slipper clutch and ride-by-wire throttle. The RR 310, however, comes with Bi-LED projector headlamps, which are a segment first. The instrument cluster on both the bikes is digital.

At Rs 2.05 lakh (ex-showroom), the TVS Apache RR 310 undercuts the KTM RC390 by close to Rs 30,000. Does that make TVS a better value? Well, it sure is a great value for money proposition given the goodies it packs, however, the KTM is more powerful and comes with a few more extras to justify its higher price tag. Which one’s better? Like said before, we’ll have to test them against each other in the real world to tell you that. So, stay tuned for a comprehensive comparison test…