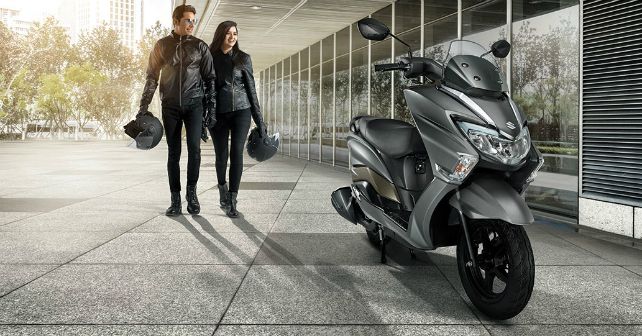 The premium 125cc scooter segment has really grown in the last few months. Honda brought in the Grazia, TVS introduced the Ntorq and Aprilia launched the Aprilia SR 125 at this time. It is now Suzuki’s turn to join the bandwagon. The Japanese bikemaker, however, has taken a different approach to the segment. The company took the wraps off the Burgman Street at the Auto Expo in February and they are now set to launch it on 19th July. Interestingly, this will only be the second time that any two-wheeler manufacturer has brought in a maxi scooter to India – the first one was the Blaze 165 from Kinetic.

At the Auto Expo 2018, Suzuki claimed that they have specifically designed the Burman Street maxi scooter for the Indian market. In terms of design, the Burgman Street does justice to the maxi-scooter tag. Unlike most scooters, this one has large dimensions and proportion. The front fascia is large, wide and houses the U-shaped LED headlamp. Setting it apart from other 125cc motorcycles is the large windscreen and the exposed handlebar. The bulky proportions of the seat and the exhaust sync well with the dimensions of the rest of the scooter. The Suzuki Burgman Street gets its fully digital instrument cluster from the Gixxer range. The maxi scooter also gets tubeless tyres, a 12v charging socket and more.

When launched the Suzuki Burgman Street is likely to be priced around Rs 6,000-8,000 more than the Access 125. Since there are no other maxi scooters on sale in India, the Burgman will hold its own against some really impressive premium 125cc scooters like the TVS Ntorq, Aprilia SR 125 and the Honda Grazia. Suzuki has already commenced bookings of the new Burgman Street at a minimum payment of Rs 5,000.