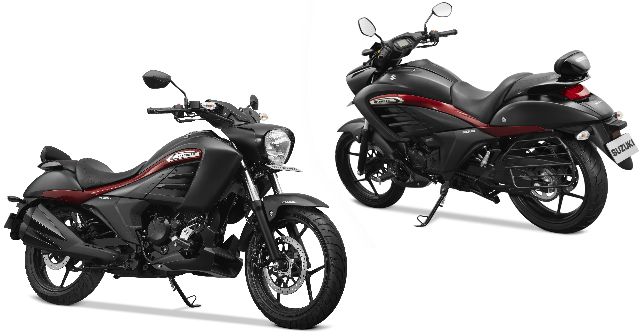 The Special Edition Suzuki Intruder is priced at Rs 1 lakh and Rs 1.07 lakh for the carburetted and FI variants respectively.

Welcoming the festive season, Suzuki Motorcycle India Pvt. Ltd (SMIPL) has introduced a Special Edition version of the Intruder. The company has launched the carburetted version at Rs 1 lakh while the Fuel Injected trim is now on sale at Rs 1.07 lakh. All prices ex-showroom Delhi.

Mechanically, the Special Edition Intruder remains the same as the standard model. It continues to be powered by the same 155cc single-cylinder air-cooled motor that develops 14.6bhp and 14Nm. This engine comes paired with a 5-speed gearbox. Braking duties are performed by the same 266mm and 220mm disc at the front and the back respectively. The Special Edition Intruder continues to sit on 17-inch wheels at both ends.

So, what then is unique to the Special Edition Intruder? Both versions of the motorcycle are offered in a unique Matte Black colour which isn’t available in the standard model. This matte black shade also gets a Candy Sanoma Red accent that runs along the side from the tank extensions to the rear panel. The Special Edition Intruder also gets a tiny back rest for the pillion rider – although it looks more cosmetic than functional.

Suzuki launched the carburetted Intruder in November last year and followed it up with the Fuel Injected version in March 2018. When Suzuki brought in the Intruder last year, it became the first cruiser to compete against the Bajaj Avenger in a long time.