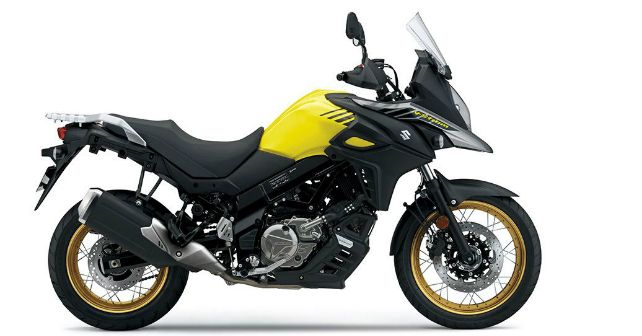 The motorcycle was first showcased at Intermot in 2016 and it made its India debut at the Auto Expo earlier this year in February.

Suzuki has just launched the first maxi-scooter in India – the Suzuki Burgman Street 125. With that out of the way, the company will shift its focus on the V-Strom 650. We have just learnt that the Middle-weight adventure tourer is about to be launched in the Indian market soon. The motorcycle made its global debut at Intermot in 2016, but India it was first unveiled at the Auto Expo 2018.

As far as mechanicals are concerned, the V-Strom 650 is powered by a 64cc liquid-cooled motor. This engine puts all of 70bhp and 66Nm to the rear wheel. In the international market, Suzuki has two variants of the model – the standard and the XT. India is only expected to get the off-road focused latter. With that in mind, the middle-weight offering will come fitted with aluminium spoke wheels, knuckle protectors, protectors for the front header pipe and even a crash protector.

So far, 2018 has been a year of adventure tourers. Triumph brought in the Tiger 800 and 1200. BMW also launched the G 310 GS recently. Kawasaki brought in the Versys X-300 and now it is time for Suzuki to join the bandwagon with the V-Strom 650. Kawasaki also brought in the updated 2018 Versys 650 late last year.