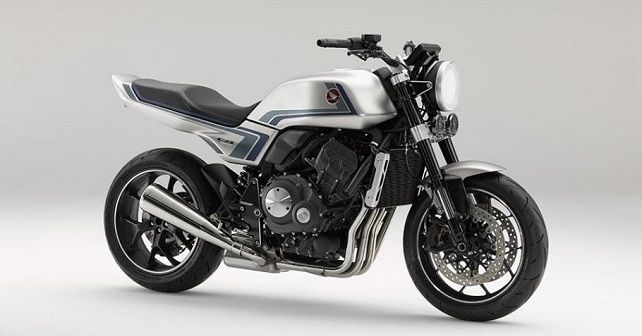 The CB-F Concept clubs the retro-classic design of the CB900F with modern mechanicals of the CB1000R. What's not to like?

Coronavirus may have put the whole world to a standstill, but Honda hasn’t completely shut the throttle as yet. You see, amidst these difficult times, Honda has decided to drop the veil on its latest CB-F Concept motorcycle. The CB-F Concept was supposed to make its debut at the Osaka Motorcycle Show and Tokyo Motor Show in this month, but due to COVID-19 outbreak, Honda has been forced to reveal the concept motorcycle on an online platform.

The CB-F Concept is a throwback special that pays homage to the Honda CB900F naked motorcycle from the early 1980s. As a result, the design is retro – the bike features a classic round headlamp, a flat-ish fuel tank, and a simple tail-section. The matte silver paint scheme with blue and grey stripes look rather cool. The megaphone designed exhaust is another retro touch.

While the design of the bike is a few decades old, everything else is modern – the CB-F Concept features the same modern mechanicals as the company’s litre-class Neo-Sports Café bike, the CB1000R. The chassis looks similar and the concept features the same upside-down front forks and a single-sided swingarm along with a mono-shock at the rear wheel.

Powering the CB-F Concept is the same 998cc inline four-cylinder engine as the CB1000R. In the CB1000R, the engine develops 143bhp and 104Nm of torque, and it’s paired to a six-speed transmission.

At the moment, Honda hasn’t confirmed if they plan to put the CB-F Concept into production. However, we think it looks pretty cool, and putting the CB-F into production won't really hurt a manufacturing giant like Honda, even if the bike makes little to no sense economically.