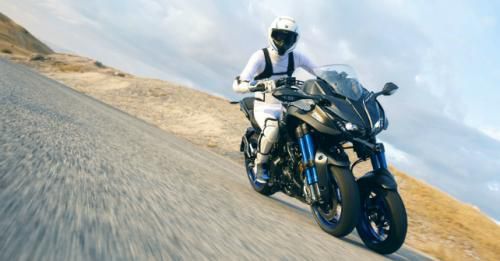 The Yamaha Niken was first previewed in the MWT-9 concept in 2015. What we have here is the production model, ready to go on sale in 2018

Three-wheeled motorcycles aren't new to the world. Harley Davidson, Honda and a few other manufacturers have showcased some in the past but with one wheel at the front and two at the back. Reverse trikes – with two front wheels and one at the rear, however, seem to be gaining popularity now. When speaking of these the Piaggio MP3 and the Yamaha Tricity are the first to reflect in the mind. Both these, sport a small capacity motor that is more suited for commuting.

It is no secret that Yamaha had been working on a high-displacement reverse trike for a while. The company first unveiled the concept, the MWT-9, at the 2015 Tokyo Motor Show. The Japanese bike maker has now taken the wraps off its production version – the Niken.

The Yamaha Niken is based on the same engine that works on the MT-09. While this engine is good for 113bhp and 87Nm, but Yamaha hasn’t revealed the exact output figures of the Niken. It makes use of what Yamaha calls Leaning Multi-Wheeler (LMW) technology that helps it with enhanced stability on various road surfaces at the same time providing an enjoyable ride on winding roads. The front end has been fitted with 15-inch wheels and twin-tube upside down forks.

As far as the design goes, the Yamaha Niken looks identical to the concept that was unveiled a few years back. The Niken is 2,150mm long, 885mm wide and 1,250mm tall. Yamaha hasn’t revealed too many details about the Niken as yet, but they are expected to share more information at EICMA 2017 next month.