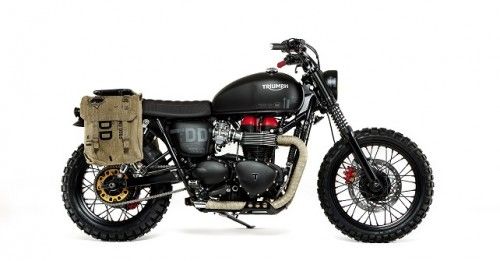 Based on Konami’s Metal Gear Solid V: The Phantom Pain, the custom Bonneville – Venom – was unveiled to celebrate the launch of the forthcoming video game.

Here is a unique Bonneville that Triumph and Konami have designed together. Built specially for the forthcoming game Metal Gear Solid V: The Phantom Pain, the bike has been customised at the Triumph’s factory and will make its debut at the MCM London Comic Con. In the video game, the bike will be ridden by ‘Snake’ and it reflects the true nature of the mission-ready, ex-special forces and mercenary character.

The bike will come studded with custom rims with off-road tyres. The stock saddle has been cut down and refinished in ‘sneaking suit neoprene’ and carbon kevlar leather resonating with Snake’s iconic combat wear. A heavy duty ammo rack loops around the back of the saddle offer not only protection but also is secure enough to bolt down an extra case or two of .50 cal.

The front end looks distinguished and aggressive with a yellow headlight and no-nonsense, heavy duty fork springs. This look is then complimented by the missing front mudguard. The rear half cut mudguard adds on to the mean looks of the motorcycle. Another details like colour matched callipers and cam cover give it more individualistic look.

The custom Venom Triumph Bonneville will make its debut at the MCM London Comic Con from May 22 to 24, and then will attend a number of events throughout the year in order to promote the upcoming game.