TVS NTorq : A quick review of the onboard connectivity features 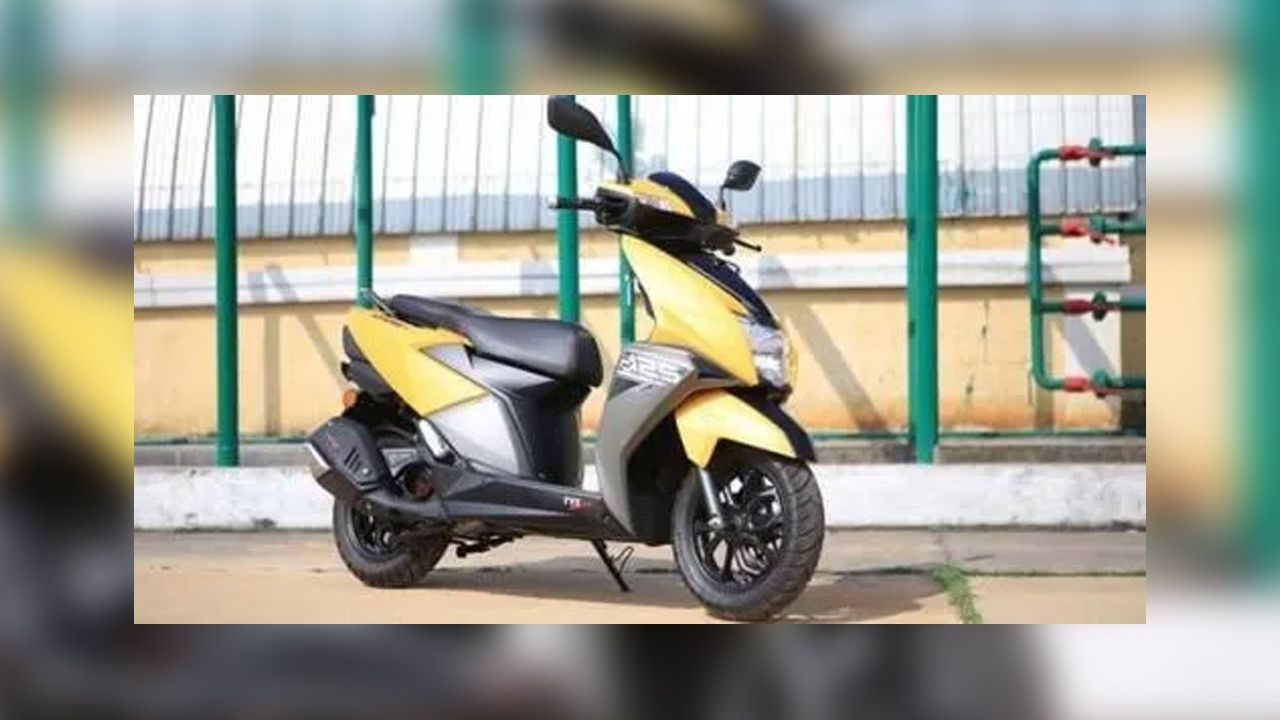 The TVS NTorq 125 packs some segment-first smart features like Bluetooth connectivity, onboard navigation and more. Do these actually work though? We find out...

Say hello to the newest member of our long-term fleet, the TVS NTorq 125. Now, it’s only been a couple of days since it arrived at our office and there’s still a lot of riding to be done before we post a definitive report on its everyday performance. For the time being, though, we’ve decided to give you a detailed guide as well as a review of the connectivity features that this funky 125cc scooter packs. Let’s get going then…

At the launch of the NTorq 125 earlier this year, TVS claimed that it’s ‘India’s first connected scooter.’ What that means is that it comes with Bluetooth connectivity – SmartXonnet in TVS-speak – which lets you use a number of features via an app. At the moment, the app – called TVS NTorq – is only available on Google Play Store for Android users. TVS insists that Apple/iOS users will get this app soon.

How does it work?

So, the first thing you do – after buying the scooter, that is – is to download the 30mb NTorq app on your Android Smartphone. Next up, you open the app and create a rider profile – put a username, display picture, et al – just like your usual social media stuff. Your location will be automatically detected via GPS. 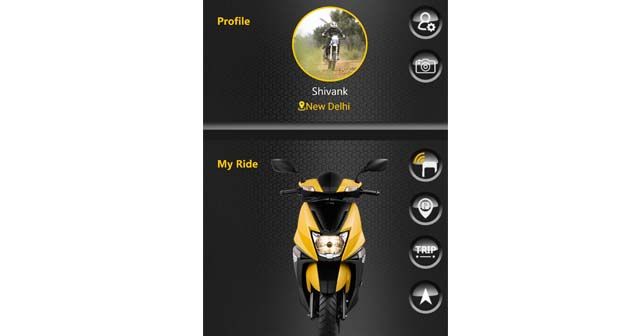 Below the Profile menu is My Ride section (check the picture above). In there, the first option on the top right is Vehicle Search system. Tap on that and the Bluetooth on your device will turn on. However, before this, you have to ensure that the scooter’s ignition is on and it’s in BT Pair Mode. How’s that done? Quite simple. Just press the Mode button – left button below the instrument cluster – for five seconds and you’ll see the BT Pair Mode flash on the display. Once the scooter’s Bluetooth is discoverable, it’ll show up in the search section of the app. Tap on that, accept the passkey and your smartphone will connect to your scooter.

Does it actually work?

It actually does! Connecting a new device does take some time, but once done, it automatically pairs to the scooter next time onwards. And after syncing your phone with the scooter, a lot of things can be done, including saving the trip data, using DND service or auto reply SMS feature, getting over-speed alert, et al. 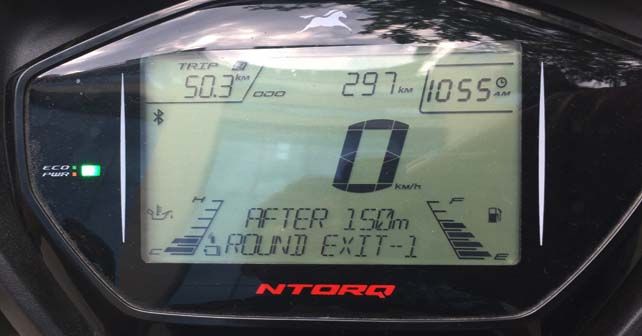 The most important feature here – at least for me – is the Navigation system. To be honest, I’ve always fancied an inbuilt navigation system on two-wheelers. You see, in this day and age, a navigation device is a must. In a car, you can use it via your phone, but on a two-wheeler that can't be done. I don't know about you, but the inability to use a navigation system on a motorcycle has often left me feeling directionally challenged at intersections. And it's something that I don't enjoy much. So, when TVS introduced this feature in the NTorq, I was really keen to see if it solves the aforementioned problem for people on two wheels.

To get started, you need to go to the app again and press the Navigation icon on the bottom right. The map provider, in this case, is MapmyIndia. The interface is fairly simple to use – type the destination in the search bar and start the navigation. The navigation menu also has four quick icons to find nearest medical assistance/hospital, fuel station, eating joints and TVS sales and service outlets. 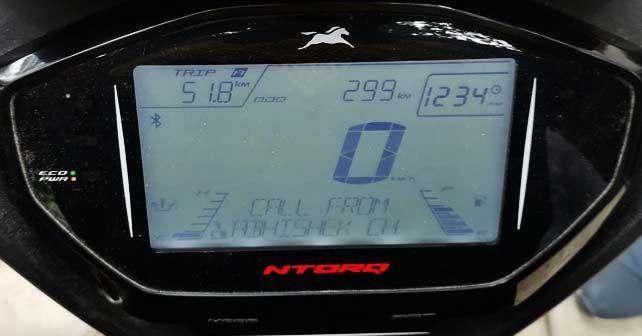 Once you start it on the device, it shows up on the instrument cluster. However, there aren’t any fancy graphics or anything. You just get basic information at the bottom of the screen like ‘Turn right after 500m’ etc. It doesn’t show ETA on the dashboard either. Initially, I found it to be a bit confusing – like when there’s a roundabout up ahead, it flashes the message in instalments, much like those ancient pagers. This means you have to wait for a couple of seconds before you can read the entire thing. It gets distracting in traffic. Apart from that, the system actually works. For instance, if you take a wrong turn, it immediately re-routes and finds you a new way. I was expecting it to be slow in that regard, but it was quite quick and smooth.

The only problem is that the navigation system doesn’t take real-time traffic into consideration, meaning it picks up the route based on the shortest distance, and not shortest time. Just to be sure, I cross-checked it with Google Maps for different locations and every time I noticed MapMyIndia pick the pre-set route.

Despite that, though, I am really satisfied with the system. Sure, it isn’t the most sophisticated system out there, but it gets the job done nonetheless. Plus, don’t forget that it’s the first time we’re seeing this sort of functionality in a two-wheeler, so there isn’t much room for petty complaints like these.

Apart from navigation, the app also saves the trip data once your turn the scooter off. As you can you see in the picture below, it stores the top speed, distance covered, travel time, traffic time (time spent standing still during the trip), etc. Additionally, you also have the ‘Last Parked location’ feature that tells you the exact location of the scooter when it was last connected.

Another interesting feature is the caller ID and DND feature. If you get a call on the move, a green light starts blinking on the dashboard and the name of the caller appears on the instrument cluster. If you don’t want to answer calls, there’s an auto-reply text option, too. 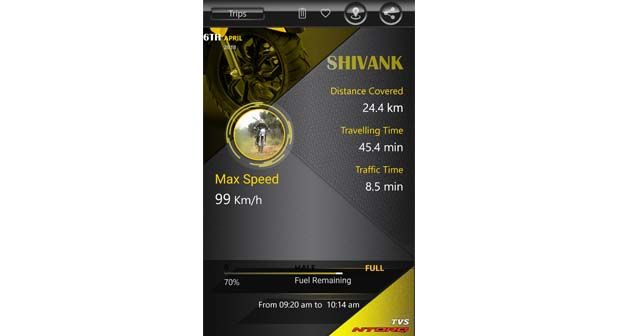 From what I’ve observed, the NTorq app is heavy and consumes a lot of phone battery. Yes, you can always charge the phone using the onboard USB charger that’s neatly tucked in the under-seat storage compartment, however, the charging would be super slow. More worryingly, I noticed my phone overheats a lot when it’s connected to the scooter’s Bluetooth system/app. It’s something that doesn’t usually happen while using other applications.

Overall, the SmartXonnect is an, erm, smart feature to have. I am sure TVS will be doing its bit to evolve the system in the coming time and it’ll only get better from here. All told, it’s a good start and more two-wheeler manufacturers should consider installing such connectivity options in their products.