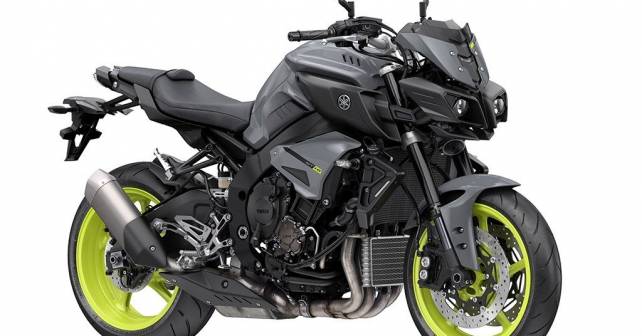 Yamaha reveals specs and details of forthcoming MT-10 naked. Shares powertrain and a lot of other technical goodies with the YZF R1 S.

You may remember the astonishing Yamaha MT-10 super-naked streetfighter from the 2015 Milan Motor show. The successor of the FZ1, the MT-10 was unarguably one of the major attractions at the show last year. At the time of its unveil though, Yamaha refused to divulge any details or specifications of the bike. After keeping us waiting for months, Yamaha has now outed all the required facts and figures about the MT-10. And we've to say its spec-sheet looks as menacing as its outer appearance!

In essence, the MT-10 is a stripped out version of the company’s YZF-R1 S (the most affordable variant in the R1 range). That means, it trades the fairings of the latter in favor of a lithe and mean naked look. Mechanicals, however, are mostly identical to that on the R1 S. The 998cc, 4-cylinder cross-plane engine has been detuned to produce 158.2bhp @ 11,500rpm and 111Nm @ 9,000rpm. It comes mated to a 6-speed gearbox.

Apart from sharing the powertrain, the MT incorporates the same chassis, swing-arm, suspension, electronics package and wheels as of the R1 S. Similar level of rider aids are also available including different riding modes, traction control and Yamaha’s Slip & Assist clutch. It also gets a full LCD dash and cruise control.  Tipping the scale at 210kg and with a short wheelbase of 1,400mm, Yamaha claims the MT-10 will be able to “deliver light and agile cornering with solid straight-line stability.”