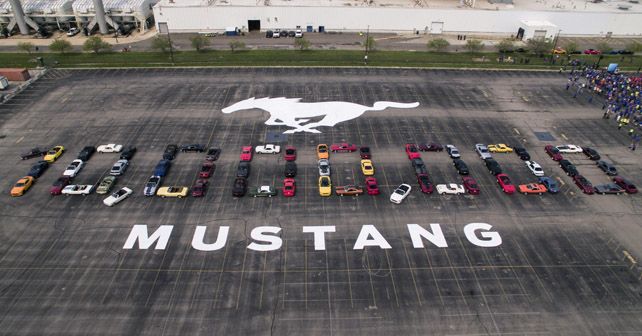 In 54 years, 10 million Mustangs have been produced by Ford.

The Ford Mustang has reached a new milestone of 10,000,000 units manufactured since the first one rolled off the production line in March of 1964.

As a tribute to the first unit that was produced, Ford made sure that the 10 million unit was a white convertible Mustang with a V8 and a manual transmission.

In celebration, Ford hosted an event at its Dearborn headquarters and Flat Rock Assembly Plant which saw P-51 Mustang fighter planes fly over along with a parade of Mustangs from every generation which drove down from Dearborn to Flat Rock.

The Mustang is now in its fifth-generation which went into production in 2015 and was given an update earlier this year with more refined and powerful engines. The Mustang is Ford most successful model since the Model A. Since it was conceived, the Mustang has come a long way. In its most basic GT form, it produces over 450bhp while back in 1964 the most powerful V8 Mustang could produce 271bhp.

In 2016, Ford India introduced the Mustang with a limited number of units allotted to our market. The Mustang debuted in India in its Fastback GT form with the full bowl 5.0-litre V8 and automatic transmission. While the Mustang did receive an update for the 2018 model year, the new version is yet to arrive in Indian shores.