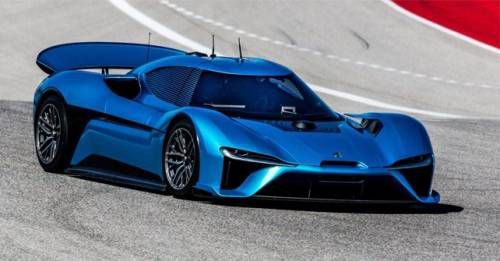 After setting fastest EV lap record at the Nurburgring recently, the madly powerful NIO EP9 now becomes the fastest autonomous car to lap the Circuit of the Americas.

After claiming the fastest electric vehicle (EV) lap record around the Nurburgring racetrack a couple of months ago, the mad NIO EP9 electric supercar has hit the headlines yet again. This time around, the supercar has claimed two lap records at the Circuit of the Americas (COTA) in Texas, US. It is now the fastest autonomous car to have lapped the COTA. Plus, with a driver behind the wheel, the EP9 also turned out to be the fastest production vehicle around the circuit!

For the uninitiated, NIO is a sub-brand of China’s NextEV brand, and the EP9 happens to be its first electric car. As per the company, its philosophy is quite simple – NIO wants to make cars that deliver superior performance, have jaw-dropping aesthetics and offer a unique experience to the user. And you just have to take a glance at its new offering so as to understand that they’ve very nearly achieved that. But, not only does it look gob-smacking, it’s mind-blowingly fast as well.

Towards the end of 2016, the EP9 lapped the Nurburgring in 7:05, thereby, becoming the fastest EV to go around the Nurburgring. Now more recently, the firm decided to take on the COTA, where it put an impressive lap time of 2:40 in autonomous mode, followed by a 2:11 with a human behind the wheel. For a startup manufacturer that has appeared out of nowhere, that’s quite a feat, wouldn’t you say?

So where does that kind of lap-record-shattering performance come from? The NIO EP9 incorporates four high-performance electric motors and four individual gearboxes to lay down its 1MegaWatt of power – equivalent to 1,341bhp – and 1480Nm of torque on the tarmac. Performance figures are quite mind-boggling as a result. 0-200km/h is done and dusted in 7.1 seconds while it can reach up to a top speed of 313km/h! Go light on the throttle, though, and the EP9 will have a range of 427 kilometres. All of that will be done without harming the environment one bit, of course.

To rein in that kind of power, the EP9 features a carbon-fibre chassis that is not only feather light but is also stiff enough to handle 3G cornering forces. Additionally, there are some serious aerodynamics aids. As per the company, the EP9 is capable of achieving 24,000 newtons of downforce at 240km/h!

The only sad part is that there hasn’t been any official confirmation on the launch date of the NIO EP9 at the moment. That aside, every aspect of the NIO EP9 is right on the money, we think.