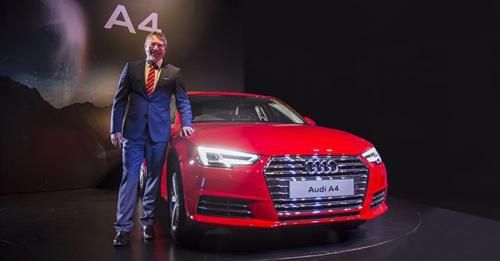 The fifth generation Audi A4 model year 2016 has been launched in India for Rs. 38.1 lakh (ex-showroom Delhi).

The all new A4 has been launched in India currently only with a petrol engine. Audi now offers the A4 sedan with an all new 1.4-litre, 4 cylinder turbocharged petrol motor. Mated to a 7-speed dual-clutch S-tronic automatic gearbox the new engine churns out 147.5bhp and 250Nm of torque. The sedan accelerates from 0-100km/h in just 8.5 seconds and has a top speed of 210km/h. Audi also claims that the petrol A4 can achieve up to 17.84km/l in fuel economy.

The suspension setup on the New A4 is a full independent set up with five-link axle with track rods, aluminium transverse link, subframe and tubular anti-roll bar for the front and resiliently mounted subframe and anti-roll bar for the rear to provide a comfortable ride for occupants. On the new A4, you also get ventilated disc brakes all around with ABS, EBD, electronic differential lock (EDL), traction control ASR and electronic stabilization control ESC.

The new A4 gets subtle changes with a new 3D-like protruding front grille, flanked by newly designed headlamps with twin DRLs in the cluster and with a prominent shoulder line running from the front all the way to the rear of the car.

In terms of equipment inside the cabin, the A4 has Audi’s latest virtual cockpit digital instrument cluster with the help of a 12.3-inch TFT screen. The centre console has a large tablet like screen on top which has the Audi’s user friendly MMI infotainment system with navigation, which has received an update from the previous generation with rotary dial and a a responsive touchpad. The system also supports Apple CarPlay and Android Auto for seamless connectivity. Audi also offers Qi wireless charging phone box neatly tucked away inside the arm rest which can charge electronic devices like modern smartphones wirelessly. All of that is packed into a dual-tone black and beige cabin with authentic wooden panels on the dashboard and the door panels. The simple layout of the centre console also features metal finished buttons while the seats have beige coloured leather upholstery. The rear passenger legroom has also been increased for better comfort for ear passengers as the vehicle has been elongated up to 4.7 metres.

The new A4 will compete in India against the BMW 3-Series, Mercedes-Benz C-Class and the Jaguar XE. For the moment, Audi will only offer the new A4 with a 30 TFSI petrol engine and only front wheel drive, but the diesel engine will also be launched soon in addition to the the Audi’s Quattro all-wheel-drive system. The new A4 is available in India in two trim variants - Premium Plus priced at Rs. 38.1 lakh and Technology priced at Rs. 41.2 lakh, ex-showroom Delhi.