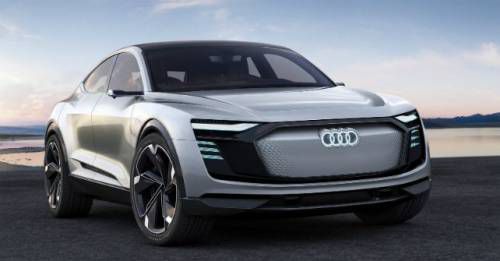 Excitement builds as more manufacturers reveal their plans for the upcoming Shanghai Motor Show scheduled to commence next week. Audi is the latest car maker to join the bandwagon. The company has recently released images and a video of a concept car they are expected to debut. Judging by the pictures and the video, it appeared to be an electric vehicle – something that was given away by showing off the e-tron emblem in the teaser video. Now, the luxury car maker has released the first images of the e-tron sportback concept. Audi says this concept is more of a design study and a means to showcase technology, the production version is expected to be ready by 2019.

The new Audi concept sports a four-door wagon-esque design with razor sharp cuts all around that make it look futuristic. Just look at those 3D sculpted wheels! Up front it will get sleek LED headlights on either side of Audi’s signature grille. The Audi badges too seem to be illuminated.

On the inside, this Audi concept is expected to sport a much-sophisticated version of the company’s virtual cockpit. This new system is expected to have screens for rear view camera, climate control and some other updates. The four-door concept has space enough for four with dedicated infotainment screens for passengers at the back. At the heart, the e-tron concept is powered by a 95kWh battery that gives it a range of around 500km, similar to the e-tron Quattro concept from 2015. The motor can get the e-tron concept from standstill to 100km/h in just 4.5 seconds.
This isn’t the only electric vehicle Audi has been developing. The company also has another electric vehicle on the cards for 2020.