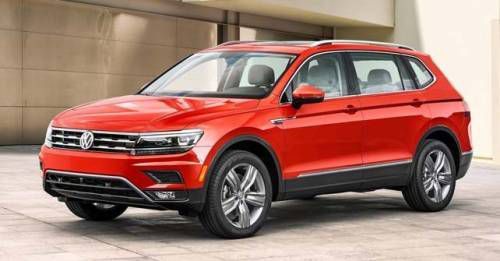 As promised earlier, Volkswagen has revealed a long-wheelbase version of the second-gen Tiguan at the 2017 Detroit Motor Show. Billed as the Tiguan Allspace, the new variant is more spacious and comes with a more practical 7-seat layout.

Since it’s a long-wheelbase version, it obviously means that the Tiguan has now grown longer than the regular model. There has been an increase of 215mm in the overall length of the vehicle, whereas the wheelbase has also been stretched by 110mm. All of these modifications have allowed enough space to fit an extra pair of seats in the SUV, making it a 5+2 seater.

Apart from the aforementioned changes, Volkswagen designers have also given the Allspace a new bonnet and a new grille so as to differentiate it from the standard Tiguan. In the US, the long-wheelbase Tiguan will be offered with a single engine option – 2.0-litre TSI petrol engine developing 184bhp and 300Nm. Power transmission duties will be carried out by an eight-speed automatic sending drive to front wheels as standard. All-wheel drive will be optional. European spec models will add 2.0-litre TDI engines in the range.

As for the Indian market, Volkswagen is expected to launch the standard Tiguan sometime later in 2017. There’s no confirmation on the Allspace derivative making it to our market as of now. However, since the upcoming Skoda Kodiaq – which is based on the same platform – and is also a seven-seater, the Tiguan Allspace may also come here in the future.