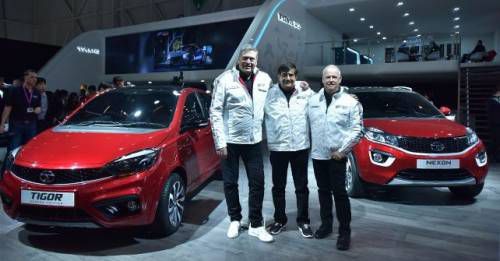 Tata recently christened its upcoming entry-level compact sedan as the Tigor. Since then the Tigor has made its first public appearance at the ongoing 87th Geneva Motor Show. But to make things more special Tata Motors is showcasing the new Tigor in a ‘Geneva Edition’ special avatar which gives it projector head lamps, a reprofiled front bumper which gives the front end of the car a more purposeful stance. The car also gets snazzy new alloy wheels and full LED tail lamps at the back. Another highlights in this special edition Tata Tigor is a touch-screen infotainment system which also does duty in the company’s new Hexa MUV.

The Tata Tigor is essentially the sedan version of the Tiago hatchback. And will go on sale in India with the same set of powertrain options as the Tiago, which includes a 1.2 litre, three cylinder petrol engine and a 1.05 litre, three cylinder diesel engine. Both engines will be offered with a five-speed manual gearbox while an AMT automatic version will also join the ranks as well, as was the case recently with the Tiago.

Tata will be launching the Tigor around the end of March 2017 in India.

The other upcoming Tata car that has graced the expo floors of the 2017 Geneva Motor Show is the Nexon compact SUV. Tata has invariably come up with a ‘Geneva Edition’ special edition version of the Nexon as well for the Geneva show which gives it white contrast highlights at the front and window sills along with projector head lamps with DRLs, new 17inch alloys and LED tail lamps. The Nexon Geneva Edition gets a newly developed infotainment system with a 6.5 inch touchscreen interface featuring voice command recognition.  The upcoming Tata Nexon is slated to go head to head against rivals such as the Ford EcoSport, Mahindra TUV300 and Maruti Suzuki Brezza when it hits the Indian market.