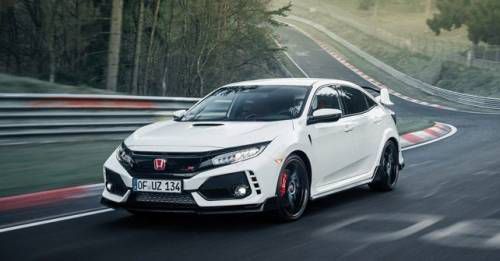 Another day, another Nurburgring record. This time it’s the new Honda Civic Type R that has hit the headlines by setting the fastest front-wheel drive lap around Nordschleife. Honda’s latest hot-hatch lapped the circuit in 7:43.8s – which happens to be around 3 seconds quicker than the erstwhile record holder, the Volkswagen Golf GTI Clubsport S.

The 2017 Honda Civic Type R made its official debut at the Geneva Motor Show. For the most part, it’s the same old car, but it gets a raft of updates that helps shave around 6.8 seconds from its lap time over the outgoing car. The 2.0-litre turbo engine gets a minor bump in peak power output – 316bhp vs 306bhp, while torque remains same at 400Nm. The engine is mated to a six-speed manual gearbox.

As per Honda, the engine has improved throttle response and driveability. However, that’s definitely not what makes it go quicker around the race-track. The main improvements come from the chassis department, meaning it has a more rigid body shell, stiffer suspension setup and wider front and rear tracks. Honda says the torsional rigidity has improved by 38%, thanks to the aforementioned changes.

Now the car that smashed the lap record is not a production version, but a “development” model. The only modification, as per Honda, is the addition of a roll cage for safety measures. Also, to compensate for the additional weight of the roll cage, the record-smashing Type R had its infotainment system and rear seats removed.  In case you're wondering, there were no trick tyres used here -  it did the lap wearing standard track-focused road tyres.

Honda may have dethroned the Volkswagen Golf GTI from the top spot for now, but this debate of who’s-fastest-around-Nurburgring is not going to settle anytime soon. While the Germans will definitely want to make a comeback soon, there’s also the brand new Renault Megane RS that’s coming out this year. Expect some more fireworks then!