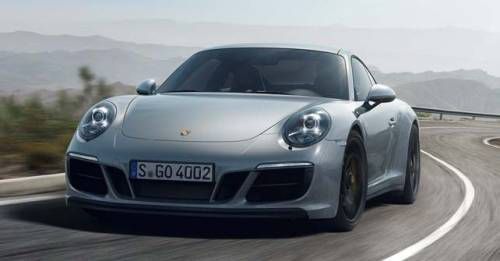 With sixteen variants under its belt, the Porsche 911 is undoubtedly one of the most expansive sportscar ranges around the world. But, Porsche being Porsche thinks there’s still some room for a few more variants to be crammed in to the range. And so the firm has obviously done that. Meet the new Porsche 911 Carrera GTS range that comprises 5 new variants including coupe, cabriolet and Targa variants.

First and foremost, it’s very important to understand as to where the GTS models fit among the sea of other 911 variants. The GTS will be positioned above the standard Carrera and Carrera S models and below the hardcore Turbo and GT3 variants. The five new GTS variants include the 911 Carrera GTS with rear-wheel drive, the 911 Carrera 4 GTS with all-wheel drive - both are available as a coupé or cabriolet - and the 911 Targa 4 GTS with all-wheel drive.

The 2017 Porsche 911 GTS models source power from the same 3.0-litre six-cylinder turbocharged petrol engine that does duty in the Carrera and Carrera S models. However, power is up by 30bhp over the Carrera S in the GTS at 444bhp. Peak torque is also up by 50Nm to 550Nm.

All variants – rear-wheel or all-wheel drive - can be paired with either a seven-speed manual transmission or PDK dual-clutch automatic. However, if you’re after the quickest GTS of the range, you would’ve to opt for the 911 Carrera 4 GTS coupe with PDK and Sport Chrono Package. In this spec, the new 911 GTS will hit 0-100km/h in 3.6 seconds. Although if you want the fastest variant of the lot, pick the rear-wheel drive GTS Coupe with manual gearbox since it’ll hit the maximum top speed of 312km/h. Other variants are only good for speeds “in excess of 300km/h””, you know…

Porsche Active Suspension Management (PASM) will be standard on all GTS models while the GTS coupés will add PASM sports chassis, which lowers the ride height by 10mm. All the variants are also based around the wide all-wheel-drive chassis – yes, even the rear-wheel drive variants. Porsche also claims the front end is aerodynamically optimized. There's a new low front spoiler and a bigger rear spoiler that reduce the lift forces on the front and rear axle compared to the Carrera S.

The aforementioned aero mods also make the GTS variants look slightly different from the regular Carrera models. That said, the smoked tail lights, silk-gloss black air intake grille and central black twin-tailpipes of the sports exhaust system will greatly help you distinguish it from regular models. The characteristic Targa bar on the GTS Targa 4 is finished in black for the first time so as to give it a distinctive look, says Porsche. Inside, there’ve been a number of GTS-specific changes like alcantara seats with GTS logos, a stopwatch on the dashboard, Porsche Track precision app for analyzing driving data on a smartphone, etc.

Porsche has started taking orders for the new 911 Carrera GTS range in Europe, with prices starting at 124,451 euros (Rs 89 lakh) and going up to 144,919 euros (Rs 1.04 crore). While there's no official confirmation on it as yet, we expect the new 911 GTS models to make it to the Indian market in the coming months.