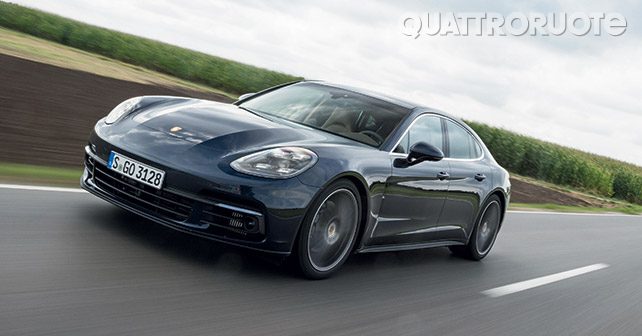 Porsche unveiled the new Panamera to the public last year and now it is all-set to be launched in the Indian market on 22nd March. Despite wearing the Porsche emblem, the current-gen Panamera hasn’t been a car that will turn a lot of heads. With the launch of this 2017 model, that is about to change. Gone is the all the fat and the it seems like Porsche has put the new Panamera through a stringent workout regime. It looks sleeker and definitely more elegant than its predecessor. The rear, with its sleek LED taillamps and the coupe like roofline, looks absolutely fab! The interior too has gone under the knife and it now looks a lot neater than its predecessor courtesy a touchscreen infotainment. Hard keys and buttons too have been replaced by touch panels all around.

Aside from the design, the 2017 Porsche Panamera also come with a new 4.0-litre V8 unit produces peak power of 542bhp and max torque of 770Nm. Mated to an 8-speed dual-clutch transmission the Porsche Panamera can do the 100km/h sprint in 4.2 seconds. The German car maker also claims that the braking of the new Porsche Panamera has been improved. Pushing the Panamera around corners too should be more fun thanks to the addition of a new rear-axle steering system that has been borrowed from the Porsche 918 Hybrid.

Porsche is expected to bring in two variants of the Panamera – Turbo and Turbo Executive at the time of the launch. Both these variants should be priced around the Rs 2 crore mark. The Panamera Turbo Executive is likely to have a longer wheelbase and thereby more space on the inside too.