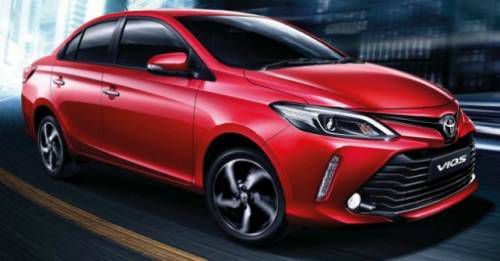 Toyota has given the Vios sedan another upgrade and launched it in Thailand at a starting price of 6.09 lakh Baht (Rs 11.75 lakh). This is the third time that the Japanese car maker has updated the Vios, although this time the changes are rather substantial. Among the many changes, the Vios’ design is now in sync with the rest of the Toyota line-up. The front-end has now been remoulded and gains inspiration from the larger Camry sedan. The two-part grille now flaunts the Toyota logo at the top with black hexagonal bottom that also houses the fog lamps. On either side of the grille, the 2017 Vios now sports sleek looking headlights with boomerang-shaped LED Daytime Running Lamps.

On the inside, the 2017 Vios comes well equipped in terms of features including a climate control, a touchscreen infotainment with smartphone integration, steering mounted controls and more. The top-spec trim also comes with smart entry, button start, rear view camera and more. The Vios comes fitted with black-red leather upholstery along with Red Front Console and Side Door Panel. Safety features include, airbags, ABS, EBD and BA.

The pre-facelift Toyota Vios has been spotted testing in India on several occasions. In Thailand, the updated Vios is available in four variant with just the petrol engine option. The Vios is expected to come to India in the near future, when it does, the car will come fitted with the same engine options as the Etios. Currently, the Etios is being offered with a 1.5-litre petrol and a 1.4-litre diesel engine options. The Vios has gone on sale in Thailand with six colour options. When the 2017 Toyota Vios is launched in India, it will take the battle to the Honda City, Maruti Suzuki Ciaz, Hyundai Verna, Volkswagen Vento, Skoda Rapid and the likes.