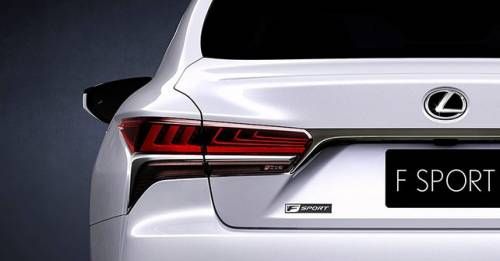 Lexus has teased an image of the upcoming LS F Sport ahead of its global debut.

Following the debut of the Lexus LS 500 in Detroit, and the LS 500h hybrid at the Geneva Motor Show, Lexus has announced that the LS F Sport will be revealed at the upcoming 2017 New York International Auto Show.

The all-new LS is based on an extended version of Lexus’ premium global architecture for luxury vehicles (GA-L) platform which they claim, is the stiffest they have ever developed. The F Sport model of the LS will gain all the benefits of this chassis and will be offered on both the LS 500 and the LS 500h.

F Sport line of Lexus basically takes their standard versions of the cars and spruces them up a little in term s of performance and appearance. The teaser image of the LS revealed by Lexus shows that the rear of the car hasn’t been impacted much with the F Sport treatment. All it gets in a small F Sport badge on the tailgate. This hints to the fact that the cosmetic changes might be slightly more significant to the front which will differentiate it from the standard car. Updates on the car are expected to be offered in the interior as well when it comes subtle styling cues. It is likely to get a new steering wheel, with new upholstery and and new front seats.

The power units will also receive some tuning and enhancements to the 3.5-litre, V6 powertrain which currently develops 349bhp in the LS 500h with the multi stage hybrid system. The same engine is tuned to develop 409bhp in the flagship LS 500 with twin-turbo chargers. How much more power will the F Sport get? We will only know when the car is finally revealed on April 12, 2017.