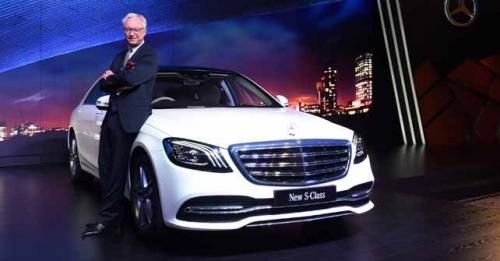 Mercedes-Benz launches the S-Class face-lift in India with an all-new BS-VI compliant diesel engine among other updates.

Mercedes-Benz has launched the S-Class face-lift in the country. Updates on the new model include subtle design refinements, new features and equipment and an all-new diesel powertrain. Prices kick-start at Rs. 1.33 crore for the S 350d (diesel) and go up to Rs. 1.37 crore for the S 450 (petrol). Both the prices are ex-showroom, Delhi.

On the design front, there are a few noticeable changes on the outside. The front fascia features a new grille with three twin louvres and vertical bars in high-gloss black, while the bumper is also re-sculpted and features bigger air intakes. The headlamps may look the same as before but they’ve been re-profiled and now feature Multibeam LED technology. Apart from the front, the rear-section features new LED tail lights with “crystal-look” tail lamp. The alloy wheel design is also new.

Inside, the cabin of the S-Class remains as opulent as before. Two large screens dominate the dashboard – one for infotainment while the other works as the instrument cluster. The updated COMAND infotainment system has also been added to the new model. Apart from this, the car comes with four-zone climate control, a panoramic sunroof, a Burmester sound system – with 13 speakers, heated armrests and a Hot Stone massage system. There’s Wi-Fi hotspot for internet connectivity as well. Plus, you also get the updated Airmatic suspension and Magic Body Control so that you don’t feel even the slightest of undulations on the road.

Coming to the powertrain options, Mercedes claims the new diesel engine in the S-Class is India’s first BS-VI compliant engine, albeit it can also run on the current BS-IV fuel. This new diesel mill is a 3.0-litre inline-six turbo engine that’s offered with the S 350d. Power and torque figures stand at 282bhp and 600Nm, respectively. The petrol powered S-Class, the S 450, gets a 3.0-litre turbo V6 that churns out 362bhp and 500Nm of torque. Both the engines come mated to a seven-speed automatic gearbox. Performance wise, the petrol definitely has the upper hand with a 0-100km/h time of 5.1 seconds as against the diesel variant’s leisurely time of 6 seconds. Top speed is electronically limited to 250km/h in both the variants.

In addition to the above updates, the new model also gets more safety features, most of which are radar-based. To name a few, the new S-Class gets Active Distance Assist DISTRONIC, Active Steering Assist, Active Braking Assist and Blind Spot Assist.

Ever since the launch of the current-gen W222 S-Class in 2013, Mercedes has despatched over 300,000 units of the car across the world. Even in India, the S-Class’s reign at the top is unchallenged and with the arrival of the updated version, it’s only going to get more difficult for its rivals – mainly the Audi A8 L, BMW 7 Series and the Jaguar XJ.