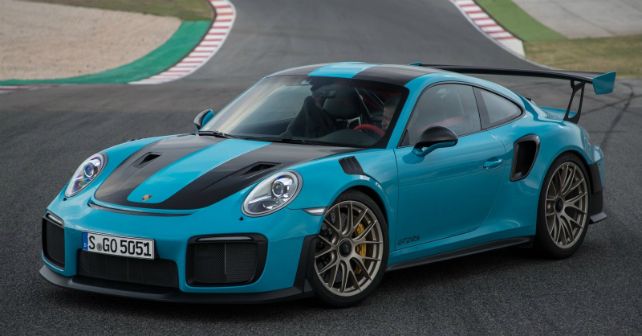 The Porsche 911 GT2 RS holds the record of being the fastest rear-wheel drive car around the Nurburgring race track.

Porsche is all set to bring in their most focused and track-oriented offering to India. Expected to be launched on 10th July, the 911 GT2 RS was officially unveiled at the Goodwood Festival of Speed last year. The German car maker India website reveals an ex-showroom price of ₹3.88 crore.

This second generation GT2 RS is powered by a 3.8-litre 686bhp, twin-turbocharged, flat-six motor. It makes peak torque of 750Nm. All that power and torque mean that the 911 GT2 RS speedo crosses the 100km/h mark in less than 3 seconds. The car can register a top speed of 340km/h. The 911 GT2 RS is a really fast car, one that can lap the Nurburgring circuit in just 6 minutes 47.3 seconds. This makes it the fastest rear-wheel drive car to lap the legendary circuit in Germany.

To extract the best performance from the engine, Porsche has managed to shed a lot of weight from the GT2 RS. From extensive use of carbon fibre to a titanium exhaust and magnesium roof as standard, the company has used every trick in the book. A limited number of 911 GT2 RS’ will be made globally – there is no announcement from Porsche as yet about how many units have been allotted for India.

Based on the 911 Turbo, the first 911 GT2 came into existence in 1995, and it was developed to meet the homologation mandate for motorsport events. The company followed it up with two more generations in 2000 and 2007, before launching the more powerful, first-generation GT2 RS in 2010.