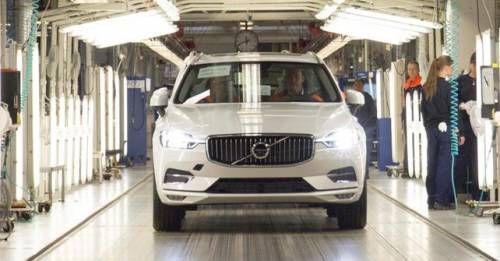 Volvo kickstarts production of the second-generation model of its best-selling XC60 SUV.

Volvo has commenced the production of the second-gen XC60 at its Torslanda plant in Sweden. The first model to roll off the production line was a T5 AWD Inscription spec in Crystal White. Commercial sales are expected to begin by June in global markets, while you can expect it to enter India sometime by the end of 2017 or early 2018.

The second-gen Volvo XC60 made its debut at the 2017 Geneva Motor Show. The new model replaces the original XC60, which had been around for nine years with nearly a million units sold around the world. Volvo says that the first-gen XC60 constituted as much 30 per cent to the brand’s global sales. As a result, the manufacturer is assured that the second-gen model will build upon the success of its predecessor, bringing in more volumes.

The new XC60 is based on the firm’s latest SPA (Scalable Product Architecture), which also underpins the XC90 and S90/V90 models. Thanks to the new platform, the new XC60 is longer, lighter and more spacious than its predecessor. On top of the mechanical improvements is the design of the new car. Compared to the conservative and dull looks of the old car, the new model follows Volvo’s modern design language, meaning it has an all striking exterior, highlighted by elements like Thor’s Hammer LEDs, short overhangs and a sloping roofline. Even on the inside it’s been completely revamped and the cabin now feels more upmarket and rich than ever before.

Powertrain options on the new XC60 include five four-cylinder engines - two diesel, two petrol and a plug-in hybrid. All the engines will be paired to an eight-speed automatic gearbox and AWD as standard.

The new Volvo XC60 competes with the likes of the Audi Q5, Mercedes-Benz GLE, BMW X3 and Land Rover Discovery Sport. When launched in India, expect it to be priced anywhere between Rs 50 lakh and Rs 55 lakh.