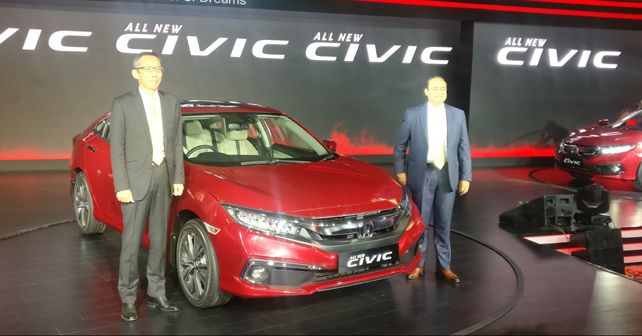 After a hiatus of nearly six years, the Civic nameplate has officially made its comeback here with the 10th-gen 2019 Civic. It has been launched at a starting price of ₹ 17.69 lakh (Ex-showroom) for the base 1.8-litre petrol V CVT variant.

Ever since its debut in India way back in 2006, the Civic has been able to carve out a segment of its own. Now though, with the 10th-gen model making its way to India, Honda seems to be betting big on its biggest weapon - the introduction of a diesel powertrain on this model. With a diesel option in the bag, the Civic is expected to reach a much wider target audience group. However, with stricter emission norms tightening the noose on the future of diesel-powered cars in India and the corresponding reduction in demand, only time will tell if the 2019 Civic has arrived on the scene in time, or if Honda has been a bit too late to the party.

Over its predecessor, the new Civic is a genuine transformation in terms of exterior look and appeal. With radical styling, it looks edgy and modern. Thanks to a chrome line flowing across the front end over the headlamps and a chunky single-piece grille, the front fascia indeed looks dominating. Further, the contoured bonnet makes the approaching car look quite butch. When I say radical styling, the immediate reference goes to the coupe-like sloping roofline instead of the regular sedan stance of the preceding model. With the roofline flowing onto the C-Pillars towards the C-shaped LED taillamps, the back end of the Civic looks equally commanding. Plus, the 17-inch alloy wheels (with a rather unconventional design) make the overall stance and presence of the car really strong.

If you thought the interior would have undergone the same sort of radical transformation as the exterior, I'm afraid you'll be let down a bit. The dashboard remains simple-looking, with the digital speedometer now finding its way within the rev counter. But, to make the overall driving position sporty, the new Civic has a rather high centre tunnel which positions the gear lever fairly close to the driver for a sporty feel. However, a high centre tunnel also means that there's space only for two people at the back. The safe and practical design approach, however, is majorly offset by the fact that the new Civic is tech-laden, with features ranging from auto brake hold and a lane-watch camera to a 7-inch touchscreen and a plethora of safety features.

The new Civic also makes use of enhanced sound-deadening materials, giving it unparalleled NVH refinement. To improve its NVH performance, enhancements such as acoustic separators inside the A-, B- and C-pillars, along with a sound-insulating windshield, have been used. To reduce road noise, sound-absorbing materials like dedicated baffle plates have been used to line the engine compartment and the underside of the car.

The 2019 Civic, for the first time in India, is on sale with either a 1.8-litre, four-cylinder i-VTEC petrol motor or a 1.6-litre, turbocharged i-DTEC diesel motor (the same unit is found in the 2018 CR-V). While the petrol engine comes exclusively with a CVT automatic gearbox, the diesel engine has been mated to a six-speed manual. While the petrol motor churns out 139bhp and 174Nm of torque, with a claimed fuel-efficiency figure of 16.5 km/l, the diesel motor, on the other hand, produces a rather sluggish 118bhp and 300Nm of torque. What the diesel engine loses in power though, it gains in efficiency as Honda claims it can deliver a class-leading fuel-efficiency figure of 26.8 km/l!

Here are the variant-wise prices of the 2019 Honda Civic: