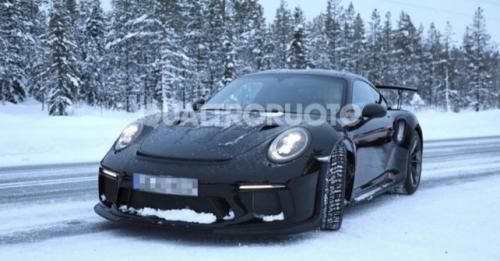 The updated GT3 RS is expected to be even more powerful.

The upcoming 991.2 generation Porsche 911 GT3 RS has been spied undisguised by our partner quattroruote. The car is expected to go official at the 2018 Geneva Motor Show.

The 991.2 GT3 RS is essentially a facelift of the outgoing model which was revealed back in 2015. Typical of any Porsche facelift, we can expect a wave of technical enhancements on the 2019 model. The atmospheric 4.0-litre flat six will most certainly remain in place, but will now be retuned to pump a higher power output of around 520bhp.

However, purists might again be in for some disappointment, as just like the pre-facelift model, only the PDK transmission option has been confirmed with no stick shift in sight. But the auto gearbox is expected to be enhanced both mechanically and electronically for even more seamless shifts. Moving on, leaks also point towards the facelifted car shedding some kilos. 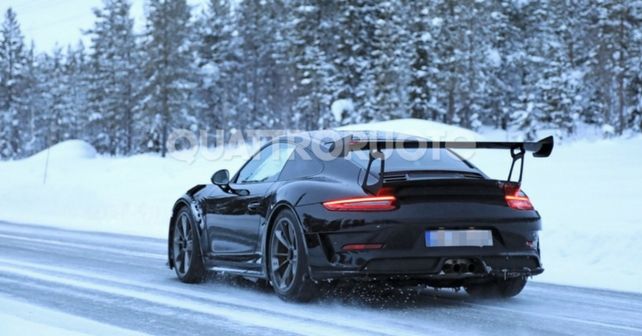 Aesthetically, the 991.2 RS’ front has been updated with a new bumper featuring sportier lines combined with a lower splitter and updated design air vents. Totally new for this model will be the two NACA ducts integrated in the bonnet, which look like they’ve been derived from the GT2 RS. At the rear, the new RS facelift will flaunt an updated wing coupled with a new bumper.

The pre-facelift 911 GT3 RS was not launched in India. However, we get the latest GT3 instead, which costs Rs 2.31 crore (ex-showroom, pan-India).