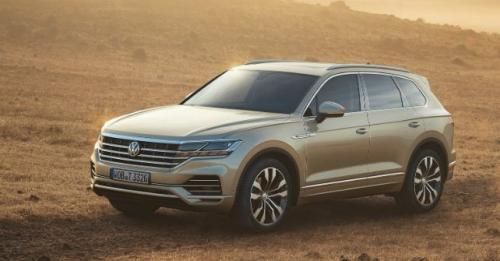 Based on the MLB platform, the new Volkswagen Touareg sports a new design is larger and packs more equipment than ever before.

Volkswagen shared teaser images of the 2019 Touareg last week and they have now finally taken the wraps off. The latest iteration of Volkswagen’s flagship SUV follows the company’s new design language that we have already seen on their new offerings like the new Jetta unveiled a few months back. Up front, the Touareg gets a wide U-shaped grille that also incorporates the LED headlights on either side. Complimenting the grille is the bumper with large air dams that give the car the muscle you’d expect from an SUV. In profile, the car looks typically Volkswagen with subtle lines across the length of the car. The tail section is as neat as the outgoing model but has slightly sharper edges. In terms of dimensions, the 2019 Touareg is 77mm longer, 44mm wider and 7mm stubby than before. 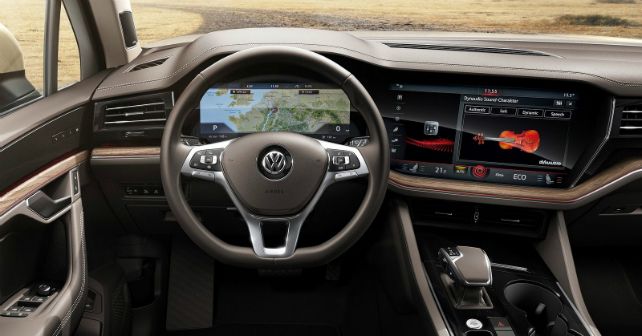 Luxury quotient on the inside of the new Touareg has multiplied. While the steering wheel is similar to what we have seen on the newer Volkswagen models, the dash is dominated by two large high-resolution screens – one behind the wheel and one for the infotainment. The instrumentation is a 12-inch digital display, much like Audi’s Virtual Cockpit. The central screen is a 15-inch touchscreen unit that performs every function in the book and more. A sleek accent of unveneered wood adds an element of luxury to the interior.

Based on the MLB platform that underpins cars like the Audi Q7, Bentley Bentayga, and the Lamborghini Urus, the 2019 Touareg will be offered several engine options. The 3.0-litre V6 diesel motor is offered in two states of tune – 228bhp and 282bhp. Volkswagen will also have the option of a petrol motor and a V8 turbo diesel at a later date. The 3.0-litre V6 gasoline mill will be good for 335bhp while the 4.0-litre V8 diesel churns out 415bhp. In China, the Touareg is being offered with a 362bhp plug-in hybrid to start with but it will arrive in the global market at a later stage.

Volkswagen had the older generation of the Touareg on sale in India for two years from 2012 but as of now, there is no news of them bringing this one to our shores.