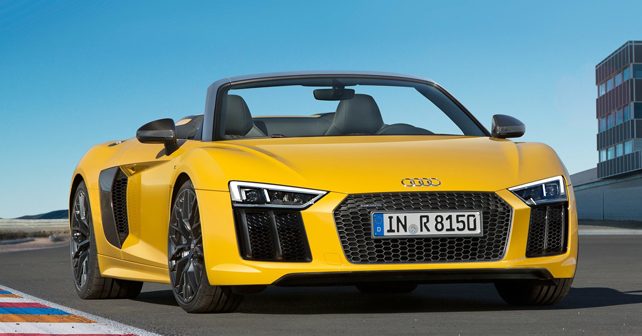 Second-gen Audi R8 goes topless at the 2016 New York Motor Show. Available only in 'standard' V10 trim as of now.

After launching the second-gen R8 in 2015, it was only inevitable for Audi to drop the hardtop off the coupe and bring in a Spyder version. And so, at the 2016 New York Motor Show, Audi took the centre stage and revealed the all-new R8 V10 Spyder.

As expected, the R8 Spyder shares almost everything with the coupe, save for a fixed roof and a couple more modifications to accommodate the folding soft-top. There are some subtle revisions in terms of styling though – like differently designed rear haunches, missing glass panel engine cover at the back, etc.

Speaking of its party-trick, the soft-top mechanism, the R8 Spyder has an electronically-operated folding fabric roof that weighs just 44 kilograms. Audi claims the roof can be opened or retracted in 20 seconds even while on the move, up to speeds below 50km/h. Tipping the scale at 1,612 kilograms, the new R8 Spyder is around 110kg lighter than its predecessor, although about 125 kilograms heavier than the coupe it’s based on. 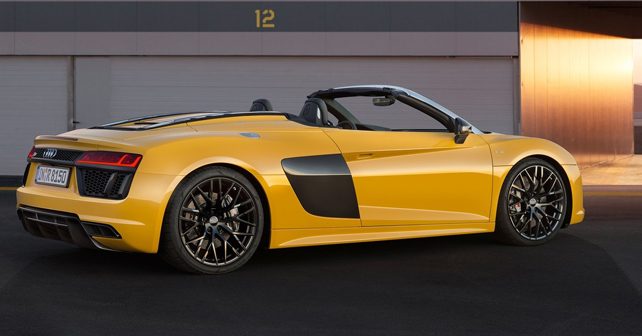 Powering the R8 drop-top is the same 5.2-litre naturally aspirated V10 engine as the coupe in ‘standard’ tune, developing 533bhp of peak power and 540Nm of torque. Coupled to a 7-speed DSG automatic sending drive to all four wheels, the R8 Spyder will sprint from a naught to 100km/h in 3.6 seconds, which is only a tenth slower than the coupe. The R8 Spyder is capable of reaching to speeds of up to 318km/h. And to ensure minimal hair fluttering at such high speeds, Audi has installed a synthetic textile wind deflector in the car that helps reduce airflow around the head by around 90 per cent!

Inside, it comes equipped with the same set of features and luxuries as the hardtop version, meaning it now gets Audi’s Virtual Cockpit display, a flat-bottomed steering wheel and an identical dashboard design and layout.

Audi launched the new R8 coupe in India at the 2016 Auto Expo at a price tag of Rs 2.47 crore (ex-showroom, New Delhi). Considering that the company sold the Spyder version of the first-gen R8 in the country before, the drop-top version of the new R8 should also be heading to our shores in the near future.