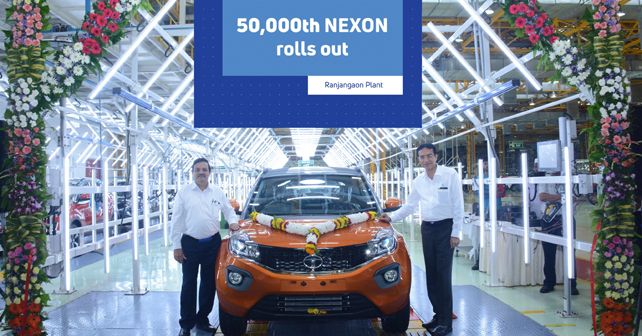 The Nexon has been among the best-performing passenger vehicles in Tata's current lineup.

Tata Motors has yet another feather in their cap as it has rolled off the 50,000th Tata Nexon off its production facility in Ranjangaon, Pune. With strong sales figures ever since its launch in September 2017, the Nexon has achieved this note-worthy feat in less than a year of its launch. Prior to this, Nexon had reached the 10,000-milestone in November 2017, just 2 months after its launch.

Despite the fact that many car manufacturers under-performed with their July 2018 sales figures, Tata Motors continued a strong surge as its Passenger Vehicles (PV) domestic sales grew by 14 per cent at 17,079 units in July 2018 over the previous year. A major hand in this growth has been attributed to the recently launched Nexon AMT which has received an 'overwhelming' response, as per company officials.

While the AMT version of the Nexon was launched initially on just the top-spec XZA+ variant, the launch was soon followed by the AMT being released on a lower-spec XMA variant as well. A few days ago, Tata had also released a software upgrade for the Nexon which provided Apple CarPlay connectivity to the car, complementing the Android Auto which came factory-installed on the Nexon.