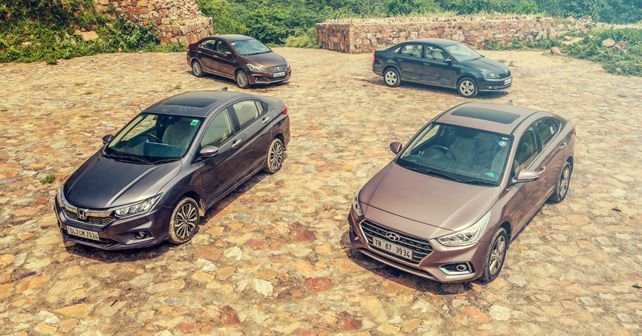 Here is how some major automakers performed during the first month of the new fiscal year.

Reports also suggest that the all-new Swift has been doing exceptionally well for the company since its launch in February 2018, however, we do not have the exact April sales number for the car as yet.

Hyundai moved 46,735 cars in India last month, rising from 44,758 in April 2018. Hyundai saw an overall volume growth of 4.4 per cent with its main vehicles – Grand i10, i20, Verna and Creta – accounting for 79 per cent of the total volume. Hyundai launched the updated i20 in February this year, and the car has been doing well since then. The Korean company also plans to introduce the Creta facelift in India this year.

Honda India registered total monthly sales of 9,143 vehicles in April 2018, therefore declining significantly YoY by over 36 per cent. The company had sold 14,480 units during the same month last year.

The main reason behind Honda’s lacklustre performance was the Amaze – the stocks of the previous-gen model have reportedly been depleted and the new one will be launched on May 16. The City proved to be the top seller for Honda, finding 3,366 new homes. The WR-V sales stood at 2,949 units, while for Jazz it was 1,747 units.

Tata Motors' passenger vehicles sales performance in the new fiscal started on an encouraging note. The April 2018 sales was at 17,235 units as against 12,827 units of last year, which is a strong growth of 34 per cent. Tiago continued its strong growth momentum in the passenger car segment and good demand of Nexon resulted in a three-fold growth for Tata in the UV segment. The company has also introduced the Nexon AMT very recently, which is expected to draw more buyers towards the compact SUV.

The American carmaker saw domestic sales of 7,428 units in April 2018, as opposed to 7,618 units in the same month last year. Ford is expecting its sales to grow over the next few months because the company has just introduced the new Freestyle at a rather attractive starting price tag of Rs. 5.09 lakh. Also, the company’s other major volume drivers – Figo and Aspire – are likely to be updated very soon.

Toyota Kirloskar sold a total of 12,964 units in the domestic market in April, resulting in a slight decline of 1.4 per cent YoY. Fortuner and Innova Crysta continued to maintain a strong position in their respective segments, helping Toyota clock good numbers. A lot of Toyota’s future sales numbers will depend upon the success of the new Yaris, which is the company's first credible offering in the competitive mid-size saloon segment.

Mahindra & Mahindra recorded a good 13 per cent growth in the passenger vehicle segment. Its domestic sales in April stood at 21,927 units, a noticeable increase from 19,325 units of last year. The company has recently introduced the updated XUV500 with more power and a plusher interior, which could possibly steal some aspiring buyers from the Jeep Compass. Mahindra will also launch its version of the Ssangyong Rexton in India later this year.