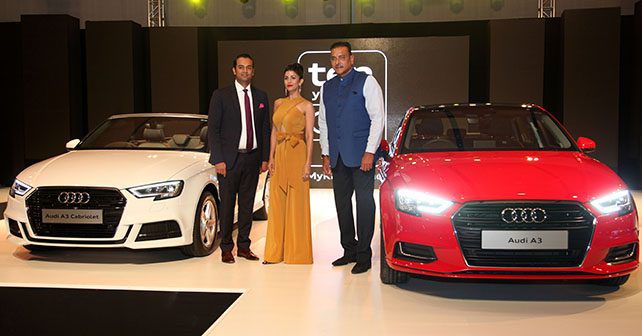 Audi India has launched the new A3 face-lift in India for Rs. 30.5 lakh for the petrol and Rs. 32.3 lakh for diesel variant. (ex-showroom, Delhi).

The Audi A3 face-lift has been launched in India in the entry level luxury sedan segment. Audi has equipped the new A3 with many more features and a new petrol engine while also refreshing the exterior styling of the car.

The A3 now gets a new 1.4-litre, 4-cylinder, TFSI turbo petrol engine which has a claimed fuel efficiency rating of 19.2km/l. This engine produces 147bhp and and 250Nm of torque and replaces the old turbocharged 1.8-litre unit. The new 1.4-litre engine comes mated to a 7-speed S-tronic DSG automatic transmission and also comes with cylinder deactivation. When the engine is running at low speeds and maximum output is not required, the A3’s petrol engine has the ability to shut down two of its four cylinders thus reducing fuel consumption. The car also comes with a 2.0-litre 4-cylinder TDI turbo diesel unit which churns out 141bhp and 320Nm of torque and comes with a 6-speed DSG automatic gearbox.

The new A3 now gets newly shaped full-LED head lamps with DRLs for the top spec, while bi-xenon ones are standard and the front grille and bumper are also new. Audi has also revised the tail lamps and it now features dynamic turn indicators and the rear bumper has also been given subtle changes while the car now sits on a new set of alloy wheels.

The interior has not received much of a change. The updated car now gets a new 3-spoke multi-function steering wheel, the panoramic sunroof is offered as standard fitment, and the MMI infotainment and navigation has been updated to the latest generation of the software. However, Audi has not offered the A3 with a virtual-cockpit, it only comes with an analogue instrument cluster. The updated A3 also gets Audi’s parking system plus with reversing camera. Other features on the new A3 face-lift include wireless charging, Milano leather upholstery and dual-zone climate control.

Variant wise prices of the new Audi A3 face-lift are as follows:-

*All prices are ex-showroom Delhi.