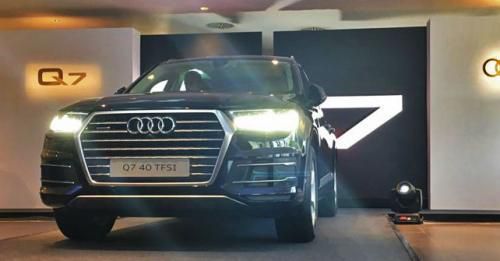 Audi has introduced a petrol model of its flagship Q7 SUV with prices starting at Rs. 67.76 lakh while a higher trim Technology Pack variant is also available at Rs. 74.43 lakh (ex-showroom).

When Audi brought in the new Q7 to Indian shores in December 2015, the company only introduced its flagship SUV with a diesel engine. But now with the demand for petrol cars increasing, Audi has now brought it in a petrol engine as an option in the Q7. Launched just in the 40 TFSI variant, the petrol Q7 is priced at Rs. 67.76 lakh and Rs. 74.43 lakh (ex-showroom).

The Audi Q7 TFSI is powered by a 2.0-litre turbocharged petrol motor that is good for 248bhp and 370Nm. The engine comes mates to an 8-speed tiptronic transmission. The Ingolstadt based car maker claims that it can do a 0-100km/h dash in 6.9 seconds. The all-wheel drive petrol SUV has an ARAI rated fuel efficiency figure of 11.68 km/l and comes with a 75 litre fuel tank.

In terms of design, the Q7 40 TFSI looks identical to its diesel counterpart with the large hexagonal grille up front and sleek looking LED lights on either side. In profile, the low ride height and overall stance almost makes the Q7 look like an estate. At the back too, the Q7 comes with LED lights with directional turn indicators.

In terms of features, the Q7 petrol comes as well equipped as the diesel. The feature list include Audi's Parking System Plus with 360-degree camera, electrically controlled dampers, Audi virtual cockpit, panoramic sunroof and more.

The Audi Q7 competes against the likes of the Mercedes-Benz GLE, BMW X5, the Land Rover Discovery and the Jeep Grand Cherokee.